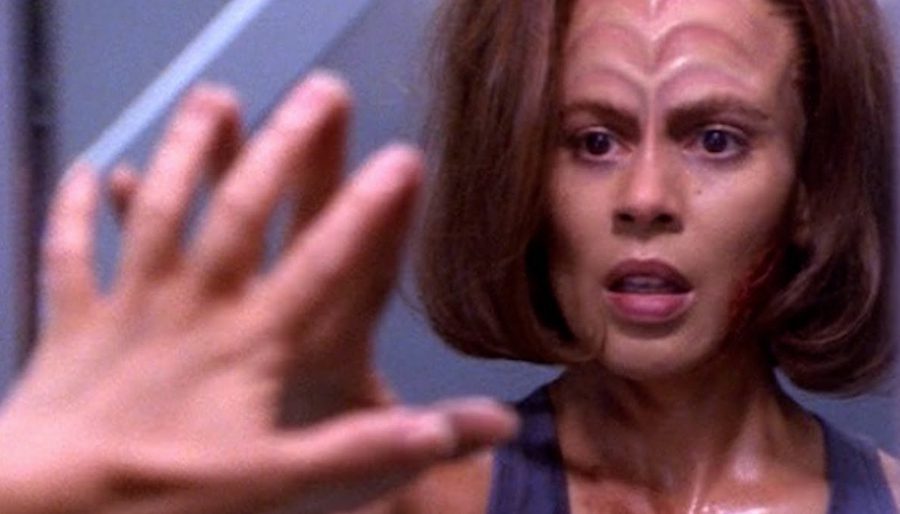 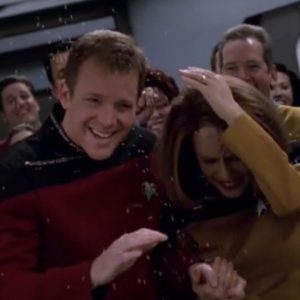 The wedding of Tom Paris and B’elanna Torres is an important milestone in STAR TREK: VOY’s journey.

I’m writing to discuss the delightful Voyager episode, Course: Oblivion. To give a recap, everything’s rosy on board the Voyager. Tom and B’elanna get married – I must have missed that relationship since I’ve only been watching select episodes from the series – and the crew are just about two years away from finally reaching the Alpha Quadrant. And then B’elanna very suddenly falls ill and dies, and things just quickly go downhill from there.

As more and more people fall ill and perish, Chakotay and Tuvok make the shocking discovery that they’re in fact not the actual Voyager crew at all, but rather clones formed after the events of the earlier episode Demon, where a planet containing “silver blood” created copies of the Voyager crew using their DNA. The clones however also carried all of the memories of their progenitors, and they eventually began believing that they were the actual Voyager crew and embarked on a journey back towards the Alpha Quadrant.

In spite of being told that they likely needed to return to their native planet to survive, the cloned Janeway insists on staying on course (even though the crew were unlikely to survive another two months much less two years). More and more people die over time, and the ship itself – which is also made from the silver blood – falls apart. Finally, Janeway turns Voyager around to head back to their native planet, and orders for the creation of a time capsule with all of their personal logs and records. It soon becomes apparent, however, that they were not going to make it back. Attempts to launch their time capsule also fail.

Eventually the last surviving crew members (with Kim now as the captain since Janeway had also succumbed) detect a ship and attempt to send out a distress call. Meanwhile, not too far away, the real Voyager receives the call and heads over to the coordinates, but it’s too late: all that remains is a cloud of silver blood floating in space. Not understanding what had just happened, the real Janeway orders Voyager to continue on their course back home. The end.

As you can probably tell from the synopsis that I’ve just given, for a series that’s known for its messages of optimism and hope, Course: Oblivion certainly does not present a particularly positive outlook on life.

I was wondering if someone in the writer’s room was experiencing an existential crisis when they created the episode, and then I realised that it was actually Bryan Fuller who’s the credited writer. Pretty much the main takeaway I got from the story is that your life is meaningless, your struggles are futile, and once you’ve died, nobody will remember you and it’ll be as if you’ve never existed. Which, to be fair, is probably true for the vast majority of people: most of us aren’t ever going to achieve anything of note; we aren’t going to find our names documented in the annals of history.

And if we took a few steps further back, the entire history of humanity, of Earth itself, ultimately will have no impact on the great cosmos. There are many stars that we can currently see in the skies that have burned out (and it is only because they are so distant that the light they once emitted have not yet faded), and we will never know of what life and civilizations might have once existed in those systems. And someday, in a few billion years, the same will happen to our sun, and it will be as if Earth has never existed.

That’s a really bright and inspirational thought to start the day.

Don’t let your irrelevance get you down

In spite of the rather dower themes, I absolutely loved Course: Oblivion (an opinion that may be somewhat controversial given that it appears to have garnered rather polarizing reactions among Star Trek fans). Personally, I like to view this episode as the cynical, twisted antithesis to The Next Generation’s much lauded The Inner Light. Perhaps I’m just slow, but I did not see the mid-story twist coming.

When B’elanna died, I thought that this must be another time travel episode, as Voyager has done on so many occasions. The reveal completely caught me off guard.

The episode is strongly reminiscent of Deep Space 9’s Whispers in that the story is told from the perspective of not the actual character(s) that we’ve been following on the show, but from a clone of them that shared all of their memories and personalities. This of course raises various questions about identity. What exactly makes a person unique? How is the clone of O’Brien, who was callously dispatched at the end of Whispers, different from the original O’Brien? Is the Riker clone that the transporter created in The Next Generation’s Second Chances not the same person as the Riker that we had been following throughout the series?

The silver blood clone of Janeway stated: “If everything about us was duplicated, that includes our memory engrams, the emotional centres of our brain. So if you feel something, remember something, believe something, I’m not about to tell you it’s not real.” Are the clones the same people as the original Voyager crew if they shared all of their memories and personalities? Do they need to have actually lived and experienced those memories to be real? 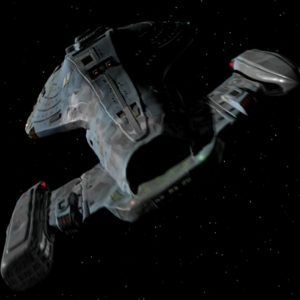 This leads me to the more intimate, personal story of the characters in addition to the broader existential angst that’s explored in Course: Oblivion. There is a real tragedy in the tale of the doomed silver blood clones as they forgot who they actually were, how they had come into existence, as they embarked on their journey to the Alpha Quadrant, driven by the memories of home and family and friends.

This is most memorably encapsulated in the scene where the crew encounters a Class Y planet similar to their own home world, but gets attacked by an alien ship there. Even though the clones could have fought back and destroyed their attacker, they chose to retreat, putting their Starfleet values above their own survival.

Again, I harken back to Whispers, to the ending where the dying O’Brien clone, in his final breath, calls out to Keiko. In both instances it isn’t just that the clones met an untimely and lonely end, but also the fact that they died whilst holding onto something that arguably isn’t real: Keiko will never know of the love that the O’Brien clone had for her and Starfleet will never know of the existence of the silver blood clones. This just adds an extra layer of tragedy to the already depressing situation.

All in all, I thought that Course: Oblivion was great; it is one of my favourites from the admittedly limited number of Voyager episodes that I’ve seen so far.

From just an entertainment perspective, the story is engaging, with a twist that managed to catch me completely off-guard and a devastatingly realistic ending. Yet, it simultaneously asks existentialist questions about identity, agency, and the meaning of life itself. What is the point of our existence if our actions do not matter in the grand scheme of things?

Does just living in the moment, fighting for the things that we believe in, as insignificant and futile as our struggles might be, make our existence worthwhile? As Angel once concluded in the eponymously named series: “if nothing we do matters, then all that matters is what we do.”