Why can’t Star Trek be more like Planet of the Apes?

Imagination Connoisseur, Kyle Arking, wonders why Star Trek doesn’t learn a thing or two from the Planet of the Apes franchise and find a way to breath new life into Trek.

Your discussion of Star Trek yesterday had me thinking: Why can’t Star Trek follow the same model as the Planet of the Apes franchise? 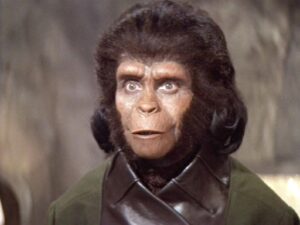 Kim Hunter from the original Planet of the Apes movie

Both are based on 60’s properties yet Star Trek has divided its fans and Planet of the Apes is still as beloved today with some of the best prequels to any franchise ever.

I love both Star Wars and Star Trek. However when I was little, I never watched Star Trek. I remember seeing the Next Generation Playmates Toys in comic book shops and they didn’t attract someone who was interested in Jedi or Spider-Man.

I was 10 when STAR TREK (2009) (imdb) was released and from that day on I became a fan. To me, the stuff that worked was the chemistry of the cast, the excellent score by Michael Giacchino, and the story. I wasn’t a fan of Star Trek prior so I had no idea what Spock was supposed to act like. The Spock I saw in the film became my Spock.

Funny enough, I bought the Playmates toys for that movie and boy was the transporter room playset fun. Sadly those Star Trek Toys didn’t get the amount of play as did the GI Joe and Avatar figures I got later that year.

I thought STAR TREK 09 was a cool movie but when I went back to watch the original movie, I was bored and confused out of my mind. STAR TREK II: THE WRATH OF KHAN (ST:TWOK) (imdb) kept me more entertained into watching more of the films. I think that a huge factor when it comes to rebooting a franchise is to get the new fans to be able to go back and enjoy the old movies.

A fan of the new Star Trek would be hard pressed to enjoy the original Star Trek films because of how different they are. This brings me to The Planet of the Apes.

I have always loved this franchise. In fact one of my earliest memories was seeing a commercial of the Tim Burton version as a baby. I had a bunch of the toys when I was little and always thought Michael Clarke Duncan’s Attar action figure was freaking awesome. When RISE OF  THE PLANET OF THE APES (imdb) came out, I was so excited. I loved the film, but walked out disappointed because I wanted the film to show all the apes talk and take over the world.

But the sequels, DAWN (imdb) and WAR (imdb) helped fix that disappointment. I will maintain that WAR FOR THE PLANET OF THE APES is one of the best science fiction films of the decade and is very underrated. There is barely any dialogue for the majority of the film and it conveys more emotion than I ever thought was possible.

I was then able to go back and enjoy all of the Apes films and the core DNA of the franchise was easily recognizable to me.

Today it is very hard to keep a franchise alive. Every franchise is a product of the times. Star Trek, sadly, has no cool video game like Battlefront to pump up the fan base or a show like THE MANDALORIAN (imdb) that has even your grandma talking about Baby Yoda.

STAR TREK: DISCOVERY (ST:DISC) (imdb) is the “new” Star Trek and I don’t know a single person that watches it. Is it because it’s on a streaming service that has been around for 3 years and has only a couple original shows? I agree with you Rob. Star Trek needs a new team behind it. I like Kurtzman but it’s time for someone new.

Another thing that the Apes franchise did right is that it focused itself around new characters. Yes, Caesar and Cornelius and Nova were in it but they weren’t the same characters as much as they were fun nods to the past films with a twist. Hopefully Star Trek finds its way.

If CREED (imdb) can revive the Rocky franchise, then anything is possible. Thanks for reading and have a great day!