Imagination Connoisseur and frequent contributor, Omar 94, is a fan of the Robin Williams-starrer, HOOK. Directed by Steven Spielberg, the riff on the children’s classic, Peter Pan, is not considered a classic in its own right – but that’s not stopping Omar.

This letter was inspired by Vesna’s letter about how she appreciates the Hobbit movies.

I know you hate Steven Spielberg’s Hook, but I will admit I have a fondness for the movie.

Are there problems with it? Yes, absolutely. However, I do still like the movie. Now, it is possible I like the movie because of nostalgia since I saw it a lot when I was younger. If I were older and saw it for the first time, I might have thought otherwise. 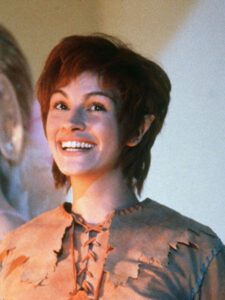 Julia Roberts as Tinkerbell in HOOK

For the movie’s problems, I think Julia Roberts was not very good as Tinker Bell, the script is not always great, and it dragged a lot during the middle. On the bright side, I did like the performances from Robin Williams, Dustin Hoffman, and Bob Hoskins, John Williams’ score is great like always, Dean Cundey’s cinematography was great, and the costumes, hair and makeup, and production value were incredible.

Spielberg, himself, has admitted to being disappointed in the movie. He said he felt like a fish out of water during the making of it, and how he did not have confidence in the script, so he made up for it by making the sets more lavish.
The movie also was plagued by going over schedule and budget. Despite that, the movie was still successful, as it made over $300 million, which was huge money in 1991.

All in all, I do still really like Hook. Do I think it’s Spielberg at this best? Definitely not. But it is certainly not as bad as many have had it out to be.