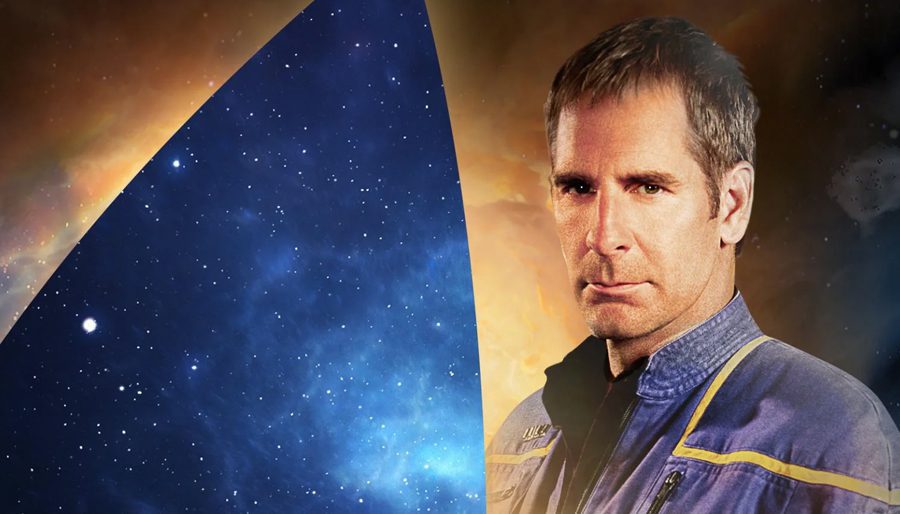 The Federation has not yet been formed, humans have just developed the first starship that’s capable of traveling at warp five, the universal translator and transporter aren’t fully developed, and the humans aren’t getting along too well with the Vulcans. The aforementioned Starship, Enterprise NX-01, is captained by Jonathan Archer, the son of Henry Archer, who worked alongside the famous Zefram Cochrane in developing warp technology.

This is the world of Star Trek: ENTERPRISE

After an incident in Broken Bow, Oklahoma, where a Klingon named Klaang crash-lands into a cornfield while being pursued by Sulibans (a new race of aliens not seen in previous Star Trek series), and is ultimately critically wounded by a farmer, Archer and his crew – which consists of Phlox, an alien doctor, Hoshi, a language expert, Tucker, an engineer, Mayweather, the helmsman, Reed, the tactile officer, T’Pol, a Vulcan who was assigned to the ship as an observer, and of course, Porthos, Archer’s beagle – embarks on a mission to take Klaang back to his home planet. Meanwhile, in another part of the galaxy, a Suliban is seen taking orders from a mysterious, shadowy figure. The Enterprise gets attacked by the Suliban, resulting in Klaang getting abducted and Phlox discovering that the Suliban have apparently been genetically enhanced.

After pressing T’Pol, Archer learns that the Vulcans have discovered that Klaang has been to the planet, Rigel X, prior to crashlanding on Earth. They travel to Rigel, where Archer encounters a Suliban defector who informs him of the presence of a cabal that’s receiving orders from the future as part of a “temporal cold war”, and that Klaang is carrying a message containing proof of the Suliban’s involvement in attacks against the Klingons.

The crew track down a Suliban vessel from Rigel, which leads them to a space station inside a gas giant. They find Klaang, and Archer has a confrontation with the head of the Suliban Cabal before being beamed on board the Enterprise via the transporter. The crew deliver Klaang to the Klingon High Counsel, T’Pol agrees to remain on board the Enterprise, and Archer is told by Starfleet that they are ready to begin their mission of space exploration.

A promising premise – but what’s with that theme song?

I will start out by saying that I really like the premise of Enterprise, of seeing a time earlier on when humans were still figuring themselves out, when they were still rougher around the edges, when they had to work in the absence of advanced technologies that we’ve taken for granted in previous Star Trek series.

Along with the changes in the time era, the show does break with a few traditions, perhaps most controversially with its use of the song, Faith of the Heart, as the intro music. I found that choice to be a bit unusual, and it appears that I’m not the only one: fans back in the day apparently held protests and made petitions demanding for the theme to be changed. One particular statement read as follows: “We wish to express our unmitigated disgust with the theme song that has been selected for the new ‘Enterprise’ series, it is not fit to be scraped off the bottom of a Klingon’s boot.”

While I’m personally not opposed to the use of a song in place of the orchestral music that has traditionally been used for Star Trek intros, I did not think that Faith of the Heart is the right choice for a Star Trek series. The song is probably more suitable for a romantic drama rather than a science fiction series about space exploration.

I do, however, really like the opening sequence of human exploration and developments; I thought that was very fitting for the premise of the series.

With regards to the main cast of characters, I haven’t yet formed any particularly strong opinions of them after the first few episodes. I will just say that I do find the humans to be more relatable here than other Star Trek series, considering that they are less socially evolved. I enjoyed seeing the rocky relationship between them and the Vulcans, which is quite different from the more jovial rivalry that the two disparate races typically have in other Star Trek series: there is real mistrust and animosity, with the humans resenting the Vulcans for holding them back and the Vulcans looking down on the humans, believing that they are still unevolved and undisciplined.

I do find the character of T’Pol to be a bit unusual; purposely or not, Jolene Blalock brings a sultriness to the character that’s typically not present in most depictions of Vulcans. She does remind me of Jeri Ryan’s 7 of 9 from Voyager, and I do wonder if that was intentional, given the latter’s popularity.

The other major alien character is, of course, Phlox, the doctor, who’s apparently a Denobulan, a new race of aliens that I don’t recall being mentioned in other Star Trek series. He reminds me a bit of Neelix (another Voyager character), but much less annoying, and I’m glad to hear of his appreciation for Chinese cuisine.

To cap off with some final thoughts on the pilot, first of all, I’m not sure if Broken Bow is the best name for the episode. I was unaware that it’s actually the name of a city; when I saw the title, my mind actually went to the bow of a ship. And really, the city had virtually nothing to do with the story apart from the initial Klingon encounter.

Secondly, things definitely got a little steamy in the decontamination chamber with the lingering close-ups of T’Pol and Tucker massaging gel onto each other’s bodies. Hey, I’m certainly not going to complain here; Connor Trinneer’s toned arms and torso are a pleasant sight to behold, and I wouldn’t mind seeing more. Finally, I’m assuming that the whole “temporal cold war” that the Sulibans are engaging in – which sounds like something from Tenet, except Enterprise was created about twenty years earlier – will come back again since Broken Bow left the story rather open-ended: the Suliban Cabal is still out here, and the identity of the shadowy figure that was giving them instructions hasn’t been revealed.

As an aside, because the Suliban leader brought it up when he said to Archer “Are you aware that your genome is almost identical to that of an ape?”, here’s a factoid: in experiments where a human gene is used to replace a homologous gene in yeast, it has been found that roughly half of the genes tested are compatible in yeast cells. In other words, even after about a billion years of evolutionary divergence, there is still a considerable level of genetic conservation between us and yeast.

All in all, I enjoyed Broken Bow. As a pilot, I thought that it did an effective job of setting up the new Star Trek series. I really liked the premise, the choice to do something different from the rest of the Star Trek franchise by going to an earlier time period, and I appreciated the references to canonical characters like Cochrane.

While I haven’t gotten attached to the crew yet, I do think that there’s promise in having a cast of characters that are rougher around the edges, that are still figuring things out as they explore the vast expanses of the universe.

I look forward to following Archer and co on their mission to explore strange new worlds, to seek out new life and new civilizations, to boldly go where no man has gone before.