TRADING PLACES is a throwback to (even) older comedies. 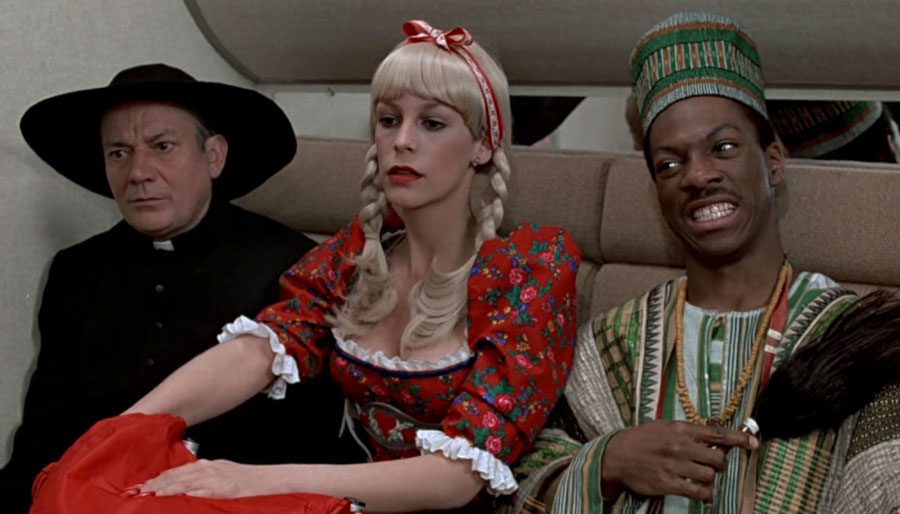 The Burnettwork’s Millennial film critic, Omar, compares the 80s comedy TRADING PLACES (with Dan Aykroyd and Eddie Murphy) to screwball comedies of the 30s and 40s.

After years of saying to myself I would watch it but never getting around to it, though I have parts of it here and there over the years, I finally saw Trading Places, directed by John Landis, and starring Eddie Murphy, Dan Aykroyd, and Jamie Lee Curtis.

We also see Paul Gleason, best known from Die Hard and Breakfast Club, and Denholm Elliott, best known as Marcus Brody from the Indiana Jones films. There is also Frank Oz and James Belushi in small roles. Fun fact, Giancarlo Esposito has a very small role in the film, as a cellmate.

I have to say, I liked it, and is reminiscent of one of those Classic Hollywood screwball comedies from the 30s and 40s. I really liked the performances from all the actors such as Murphy, Aykroyd, and Curtis.

I liked how well structured the story was, and while I know the ending raises people’s eyebrows, I didn’t have a problem with it. The movie is also visually great to look at, thanks to the cinematography and production design.

Now just a heads up for those who haven’t seen it. There are some things in it which do not hold up so well today. The n word is used several times, and there is a sequence of Dan Aykroyd in blackface.

Overall, I think Trading Places is a good movie, and would recommend it to those who have not seen it yet.

Editor’s Note: We’d like to point out that in addition to all the star power Omar identified, above, two screen stars from the 30s and 40s, Don Ameche and Ralph Bellamy star as the evil Blake brothers (the antagonists) in this film. Like Omar, we highly recommend this film.

The film was originally conceived as a vehicle for Gene Wilder and Richard Pryor. When Pryor dropped out and Eddie Murphy came on board, Murphy tried to get Wilder replaced because he didn’t want people to think he was just trying to be another Pryor.

Several funny moments in the film came about by accident.

The scene where Mortimer Duke (played by Don Ameche) is trying to catch the money clip, and having trouble, wasn’t supposed to happen that way, but both kept going with it, and not breaking character, so it was kept in the movie.

This was actor Ralph Bellamy’s ninety-ninth film, and actor Don Ameche’s forty-ninth. This was Eddie Murphy’s second film, and he joked: “Between the three of us, we’ve made one hundred fifty movies!”  Bellamy and Ameche make cameo appearances in Murphy’s “Coming to America (1988);” the two are homeless and Prince Akeem (Eddie Murphy) gives them a large amount of money to get them back off the streets.

In 2010, as part of the Wall Street Transparency and Accountability Act, which was to regulate financial markets, a rule was included which barred anyone from using secret inside information to corner markets, similar to what Ralph Bellamy and Don Ameche’s characters, the Duke brothers, tried to do in the movie. Since the movie inspired this rule, it has since become known as the Eddie Murphy Rule.

Eddie Murphy later admitted that on the floor of the commodities exchange in the final scene, he only followed the script; he had no idea what was going on, as he found commodities trading incredibly confusing.