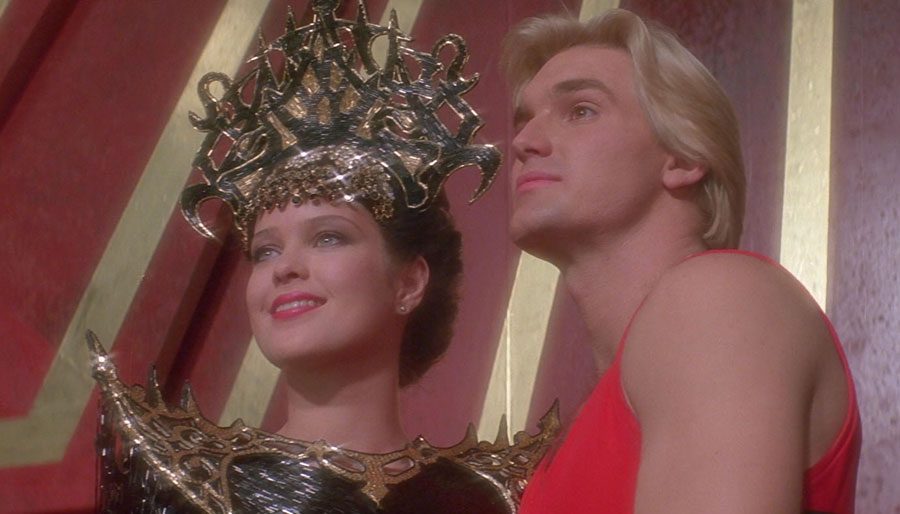 It may not have taken the universe by storm when it was released, but Imagination Connoisseur, Jason Webster, explains why FLASH GORDON has continued to build a huge following of devoted fans – even 40 years following its release.

I want to take this opportunity to discuss a film that has become of my favourites of the science fiction genre…. Flash Gordon (1980). The lavish, expensive and campy film produced by Dino De Laurentiis and directed by Mike Hodges. The British director had carved a reputation through directing noir-like dramas and thrillers such as Get Carter (1971). So, it came as quite a surprise to many that he chose to sign-up to direct what would be his first foray into helming as lavish science fiction blockbuster.

I immediately loved Flash Gordon (1980) from the time my father took me to session of the film at the Forum Cinema in the heart of the Brisbane CBD when I was a little over 9 years old. I loved the production design, lavish costumes and the campy dialogue. The moment the theme song by Queen thundered through the speakers in the cinema during the opening credits I was immediately hooked.

The movie essentially came across like a comic book on the big screen from beginning to end. I felt Queen was the perfect choice to provide the theme song for the opening credits. Anything else would have felt out of place. The producers and cast of the movie harboured no desire to take itself too seriously in a literal sense and approached it from providing a sense of fun and escapism for the audience.

It has been documented the producers were very clear in wanting to provide camp for the film – abandoning their initial idea of making a full-on serious version prior to the commencement of filming. Screenplay Lorenzo Semple Jr wasn’t so sure, but wrote the screenplay meeting the requested style of humour just in time for the beginning of production.

There was some confusion regarding the tone for the film. Production design for the film by Danilo Donati (Romeo and Juliet) provided exquisitely lavish costumes and elaborate sets awash with vibrant colour that captured the tone of the original source material while still providing a contemporary vibe. Red, gold, silver, orange, yellow, black and green were used extensively in costumes and sets. However, the visual effects team created realistic miniatures for the film. Some of which had been built before filming had even began. They seemed to marry old-fashioned effects with contemporary visual effects.

However, everything works in the film’s favour as it created an atmosphere that captured the look and feel of the popular b grade serials of the 1930s and 1940s in which Buster Crabbe played Flash Gordon. The rich cinematography by Gilbert Taylor is better than his work on Star Wars (1977). 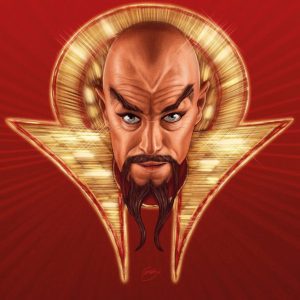 The film displayed an impressive array of experienced and upcoming talent: Max Von Sydow, Chaim Topol, Peter Wyngarde, Brian Blessed, Melody Anderson and Sam Jones. Of the actors, everyone looked to being having an absolute ball in the film. I believe the standout performers were Max Von Sydow, Peter Wyngarde and Brian Blessed. Swedish actor Max Von Sydow (The Virgin Spring) was great and portrayed Ming with charisma, arrogance and ruthlessness – the poster child for narcissistic tyrants.

Peter Wyngarde (Jason King) provided a sneering malice and deviousness to General Klytus who not only displayed contempt for Flash and his allies, but also concealed a warped lust for Princess Aura. His was the most difficult role as he had to project a personality through a heavy costume – complete with a mask that concealed his face. Brian Blessed (Henry V) brought his larger-than-life personality to the role with full force and provided some of the funniest and most memorable scenes in the film.

However, I would be completely remiss if didn’t mention the extremely beautiful Italian actress Ornella Muti (Love and Money). She brought pure, unadulterated sexuality, playfulness and charm to Princess Aura that was counteracted by a certain naivety. With the arrival of Flash Gordon at cinemas Ornella Muti became the object of schoolboy crushes and male fantasies all over the world. She was certainly one of mine and I had a poster of her on my bedroom wall. Her appearance in a major role, along with fellow Italian actress Mariangela Melato (Il Gatto) as General Kala were the reasons the film achieved success in Europe.

Flash Gordon was released in the United States on 5 December 1980 by Universal Pictures. It was released in the United Kingdom by Thorn-EMI just six days later. In the US, the film earned just USD$27.1 million against a budget of USD$20 million. The film received moderate reviews overall with the New Yorker’s Pauline Kael and The Chicago Sun-Times Roger Ebert among the critics to praise the film. Pauline Kael wrote of Flash Gordon, “the director, Mike Hodges, gets right into comic-strip sensibility and pacing.”

I believe the reason Flash Gordon performed so poorly during its theatrical run is because the timing of the film’s release was unfortunate. It opened later in the year after the release and worldwide success of Star Wars: The Empire Strikes Back (now known as Star Wars Episode IV: The Empire Strikes Back). The serious tone of Empire struck a chord with fans of science fiction and they were hungry more of the same.

Now, fans had no desire or interest to satisfy their appetite on films within the genre that were light-hearted or camp, which spelled bad news for Flash Gordon. Also, it had become customary to produce and release blockbusters aided by saturation marketing where films are relentlessly marketed across all media platforms backed by merchandising that keeps the film within the conscience of prospective audiences. De Laurentiis and Universal didn’t market the film as heavily as 20th Century Fox had done with Empires Strikes Back.

Also, a dispute between Sam Jones and De Laurentiis profoundly hindered marketing for the film within the US as he was not involved in promoting the film. As a consequence, it was decided to heavily focus marketing on Ming, which was a mistake. However, the film did perform well in Australia and Europe, especially Italy.

In terms of the marketing/promotion for the film, articles on Flash Gordon did feature in Starlog and Cinefantastique. MEGO Toys did release a line of 3” action figures of Flash Gordon, Dale Arden, Ming and Prince Baron. The action figures came in standard blister packaging – similar to the packaging of the Star Wars action figures. Bally Manufacturing released a Flash Gordon pinball machine.

EMI/Elektra released an album consisting of the music by Queen and the orchestral score by Howard Blake. The score was commercially successful and reached gold certification in the UK. There was a novelisation of film written by Arthur Bryon Cover (Autumn Angels) was published prior to the film’s release. Also, Western Publishing published a comic book adaptation of the film written by Bruce Jones (Batman) with art by Al Williamson (Secret Agent X-9). But nothing was undertaken to effectively market the toys, the comic and the novelisation to the general public.

A positive for the marketing of the film was the poster of which Renato Casaro and John Alvin collaborated on its design. It is certainly one of best designs for a movie poster I have seen. In terms of the beauty of its artwork, it is right up there with the posters for Star Wars (1977), Raiders of the Lost Ark (1981) and Blade Runner (1982).

Despite its mediocre performance in the film’s theatrical run, Flash Gordon has since gained a huge and devoted following around the world becoming a cult classic since its initial release on home video in 1981 on both VHS and Betamax.

The film received releases on laserdisc in 1998 and on DVD in both 2005 and 2007. Universal released the 2007 edition entitled Saviour of the Universe Edition. The film was released on Blu-Ray in 2010 and in 2016 when it was released under title Ted vs. Flash Gordon: The Ultimate Collection in a triple bill consisting of Flash Gordon, Ted and Ted 2 . In 2020, StudioCanal and Arrow Video released a special 4k edition Blu-Ray complete with both Blu-Ray and 4K Blu-Ray versions of the film and paraphernalia.

I was extremely thrilled to receive my copy of the 4K release from Amazon a few weeks ago. Sam J. Jones, Melody Anderson and Brian Blessed have attended many conventions over the years and have talked warmly about the large and enthusiastic audiences they have accounted at such conventions.

I liked Flash Gordon so much that I owned a fully detailed replica of the famous red/black costume Sam J. Jones wore during the last part of the movie.

Flash Gordon is pure unadulterated escapist fun in every sense of the term and provides colour and entertainment for all types of audiences, especially on a dreary day.