The Chairman is over the moon about JOHN CARTER

Dear Rob and The Post-Geek Singularity:

Once again, it is I, the Chairman, bringing to every Imagination Connoisseur some insights and thoughts into my first viewing of ‘John Carter’. I so much want to write ‘John Carter of Mars’ but alas that was not the actual title of the film. 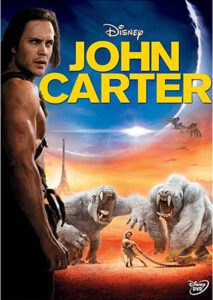 I saw this film on Blu-Ray with my son who was intrigued by the premise as well, and also coincidentally was born the same year as it was released. I know that this film was recently discussed on an episode of Elysaviews “WINE-ning About Movies” so there’s no need to rehash the specifics of the film. Rather, I thought that I would add a few interesting insights and details that I noticed about the film.

One thing that was noted in the Elysaviews review was the use of framing scenes at the beginning and end of the film to set up how a fictional version of author Edgar Rice Burroughs, nicknamed Ned, came into the possession of the Barsoom stories from his uncle, John Carter. This is taken from the books which apparently have the same framing device to suggest that the events portrayed in the Barsoom book series are real.

This is not exclusive to the Barsoom series either. Burroughs did the same thing with his Tarzan series, in fact, even suggesting that the events in the books were real, but the names were changed “to protect the innocent.” I know that this practice has been used a lot in fictional storytelling. Moreso, in older works, and less so in modern fiction, which we all just straight accept as being fictional, and we suspend our disbelief accordingly.

I wonder if the reason was quite simply that reading fiction books or stories is really quite a new thing in our culture. Sure, we always had books and written works for as long as writing has existed, but the idea of the general public reading fictional books and stories, whether it be as a novel, or published serially in newspapers and magazines, as entertainment on a wide scale, that this could be a profitable endeavor, is very new. So, authors needed a hook to get their audiences to keep coming back and reading more, and that was to try to, if not, convince their readers that the stories they were reading were real, at least give them some doubt in their minds.

This would especially be true for science fiction and fantasy works. To our minds, this whole charade seems quaint, but I guess that’s just what authors tended to do back then. On a side note, I really did not like Ian Fleming’s attempt to do this as well in “You Only Live Twice”. In an obituary for James Bond, who was missing and presumed dead, Fleming writes that he acted as kind of an embellishing hype man for Bond, that the actual missions and adventures were nowhere as exciting and thrilling, but that Fleming’s job was to make them seem that way. I just felt that was really unnecessary, and if I were his editor, I’d tell him to take it out because it comes off as excessively self-indulgent.

The other thing that I noticed is really tied into the larger issue of the bad timing that the film suffers from. It’s clearly not the fault of anyone tied to the production of the film, but rather when it came out, and it being made into a sacrificial lamb by Bob Iger and Disney in their courtship of George Lucas and LucasFilm.

In this case, though, it’s in the overall visual quality of the film on Blu-Ray. It’s a shame that now, with the film kind of being a neglected stepchild, an unwanted orphan, and also with Disney not emphasizing physical home video media like they have in decades past, it will never look as good as it could. The Blu-Ray is not bad, but it’s also not great. With my eye tuned by watching great looking 4K UHD discs, the Blu-Ray reveals a lot of flaws, and also untapped potential.

With the sweeping desert exterior vistas, and the colors of the costumes, and the different skin tones, this film cries out for a proper HDR color grading. This film would literally shine with a good treatment. The film is for the most part not very dark, but some of the darker scenes, like the wedding between Sab Than and Princess Dejah, look kind of dull, a little blurry almost. The outdoor scenes certainly fare better, although a couple times the green screen shots looked a little obvious, like the color timing was off. Also, the rapidity with which CGI ages doesn’t help the film either. It certainly was going for an Avatar-like feel with the completely CGI Tharks having a large chunk of screen time.

That perhaps may have been a bit ambitious, and I think a second film could have improved the appearance of the Tharks. One thing though with CGI is that it seems to be a never ending pursuit, with an unattainable goal. However, I would say that while not a direct apples to apples comparison because every film is different and their application of CGI is different, films from a similar time period, Pacific Rim (2013) and Godzilla (2014) had better looking CGI.

Again, what does that mean, really? It’s a subjective evaluation of how well the CGI does the job of integrating with the filmed elements and how seamless it is without any glaring flaws. It could also just be that Guillermo Del Toro and Gareth Edwards are much better at working with CGI. Andrew Stanton, while certainly very experienced with animation at Pixar, was directing his first live action film and it certainly was a good debut. However, if he had been given a chance to helm a sequel, it probably would have looked much better with his experience in hand.

So, those are some of my thoughts about ‘John Carter’. It’s a shame that we didn’t get anymore of the Barsoom series as it sounds like the book series is quite expansive and the mythology is pretty dense and there’s a lot that could have been explored.

As for what’s next, I finished watching ‘Fando y Lis’, and it’s going to be a while before I can put my thoughts together on a letter about it. I think I’ll watch the Paramount Presents Blu-Ray of “To Catch A Thief”, sounds like a good change of pace before heading back into Jodorowsky.