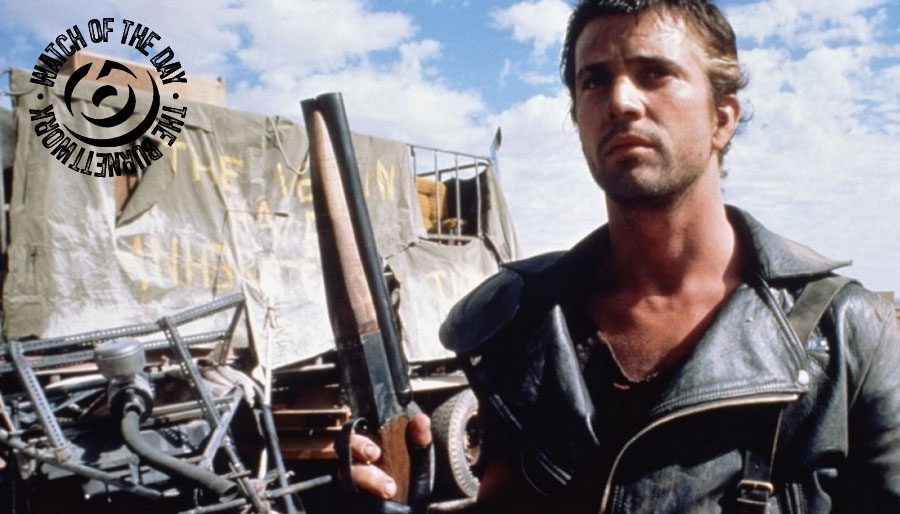 Mel Gibson returns to WOTD, but this time he’s a cop named Max who’s patrolling an impossible stretch of road in a nightmarish hellscape – all to avenge the death of his partner, his wife and his child by the hands of a motorcyle gang known as The Acolytes.

This is the first film in a dystopian series that has thrilled fans worldwide for forty years. Find out why we’ve made MAD MAX our Watch of the Day …

In a self-destructing world, a vengeful Australian policeman sets out to stop a violent motorcycle gang.

MAD MAX is a signpost of sorts. If the dystopian scifi movies of the 60s (like PLANET OF THE APES and OMEGA MAN) met the youthful, anti-establishment films of the early 70s (EASY RIDER, ONE FLEW OVER THE CUCKOO’S NEST), MAX would be mark the intersection of the two.

And it would do so, with a firey explosion, no doubt.

The story takes place in the near future – and it’s one we only sort-of recognize today. The world is colored in browns and greys. Everything is either dead, burned up or dried out (all this without an overt message about global warming, go figure) and tensions run high as people start to reconsider their priorities, putting fuel and food above neighbors and civility. 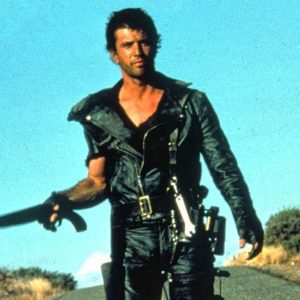 But this film is also prescient in the way it has predicted filmmaking in the 21st Century, with a few notable exceptions. George Miller, the filmmaker behind Mad Max and its sequels, goes for the visceral thrill in a way that hadn’t been seen before, but is heavily emulated now. Chaos is preferred over coherance. Max and the films live in the present and do not linger in the past, nor is there much exposition wasted to explain things to the audience.

The result is an over-arching ambiguity to the world of Mad Max that is both frustrating to the fan, but also earily realistic. Veresimilitude is reached BECAUSE of the lack of detail, rather than the opposite. The world-building is almost entirely done on-screen and because of the rampant chaos taking place before us, we’re willing to accept that compromise.

Also telling in this and subsequent Mad Max movies is the boiled-down simplicity of the storyline. This is good vs evil. It’s that simple. And it’s unappologetic about it. Filmmaker Miller is reported ot ahve said he inteded Mad Max to be like a silent movie – and for that reason a lot of the extra weight is taken out of the script, the action is pronounced and the editing is almost musical in its flow.

But like the early recordings of musicians, MAD MAX provides a relatively simple, one-take, mono recording to a story that would eventually (through its sequels) get the full, stereophonic treatment. But maybe because of that, the story of Max and the pain he suffers (and eventually avenges) is all the sweeter to hear.

Give it a listen. And a watch.

Shot in twelve weeks, on a meager $350,000 budget, in and around Melbourne, most of the extras used in the film were paid in beer.

George Miller described the whole experience as “guerrilla filmmaking”, where the crew would close roads without filming permits, not use walkie-talkies because their frequency coincided with the police radio, and after filming was done Miller and Byron Kennedy would even sweep down the roads. Still, as filming progressed the Victoria Police became interested in the production, helping the crew by closing down roads and escorting the vehicles.

A lot of the stunt driving in this movie was illegal, and done quickly, before authorities could find out. The crew couldn’t afford a breakaway prop door, so the actors had to break through solid wood.

Most of the biker gang extras were members of actual Australian outlaw motorcycle clubs and rode their own motorcycles in the film. They were even forced to ride the motorcycles from their residence in Sydney to the shooting locations in Melbourne because the budget did not allow for aerial transport.

Mel Gibson didn’t go to the audition for this film to read for a part, he actually went along with his sister, who was auditioning. But because he had been in a bar fight the night before, and his head looked like “a black and blue pumpkin” (his words), he was told he could come back and audition in three week’s time because, “we need freaks!” He did return in three weeks’ time, wasn’t recognized (because his injuries had healed well), and was asked to read for a part.