Remembering Tawny Kitaen and getting sweet on Gwendoline 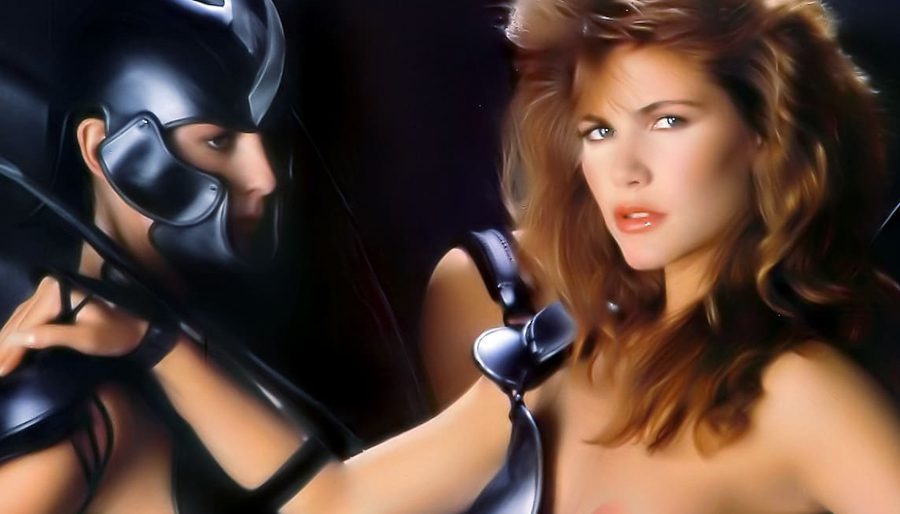 Imagination Connoisseur, Pedro Ferreira, shares another in-depth review of a seldom-seen cult classic, GWENDOLINE which manages to blend the soft core titillation of a French art house movie with the action and adventure of a pulpy, two-reeler.

When I decide to watch a film I’ve never watched before I can never be certain what I’ve let myself in for.

People may recommend a film like GWENDOLINE (1984) (aka The Perils of Gwendoline in the Land of the Yik-Yak) as a fun, cult movie and I’ll take that chance. Little did I realise how wacky director Just Jaekin’s last movie would be. 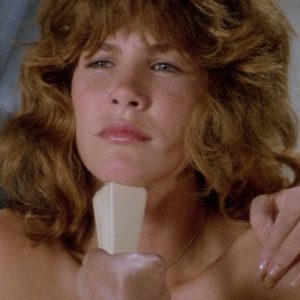 Tawny Kitaen’s intensity in acting is surpassed only by her ability to act intensely.

Willie worked with Jaekin to develop the script. What evolved from this writing partnership was a script that both combined Indiana Jones with the artistic nude situations or content you’d expect from Jaekin’s previous work. There can be no doubt the second half of the movie integrates the stylings of the Mad Max series with Ben-Hur (1959) all with sexual elements an audience watching his earlier work would expect from this director.

Completely produced by Parafrance Films the whole thing was a huge undertaking. It had the highest budget of any French made movie yet the film was never a big enough hit worldwide to keep the studio from eventually going out of business. Seeing how both France and North America marketed the movie through theatrical trailers is interesting with France presenting Gwendoline as a typically art house film while the US pushes the Indiana Jones elements. The movie sits in-between and it’s nothing as expected.

Its identity crisis is whether it should be an adventure or a bondage fantasy. Jaekin crafted a bizarre film and perhaps it failed for precisely that reason: it’s too crazy to make any sense.

The wild ride in search of a rare butterfly

Gwendoline (Tawny Kitaen) is on the trail of a rare butterfly to continue her lost father’s research which was set to make him famous. Arriving in China she uncovers evidence her father was killed in the search for the fabled insect. Determined to succeed regardless of danger she enlists the help of navy mercenary Willard (Brent Huff). Along with her loyal maid Beth (Zabou Breitman) the three of them take a journey of perilous adventures from the cannibal tribe called the Kiops through to the dangerous land of the Yik Yak where they meet the underground people of Pikaho. Can Gwendoline find the rare butterfly that eluded her father or will she fall foul of Pikaho’s Queen (Bernadette Lafont), someone who seeks to control all civilisations?

The plot when you look at what the characters are after is ridiculous.

They’re putting their lives in danger continuously all for a rare butterfly. All this for a butterfly? I mean it better be worth it! They at least acknowledge the silliness of their end goal. It’s just as well the butterfly remains a MacGuffin because Just Jaekin (what a name to have) has created a crazy yet highly entertaining movie.

The location shooting is lovely and the set design is handled extremely well especially in the second half of the movie where the characters end up in the land of the Yik-Yak. The film at this point presents an underground society run by women in bondage gear. Looking like rejects from a Mad Max movie yet most of the time wearing less, Jaekin uses the screen space to present his scantily clad extras as an art exhibit of fetishes.

It’s especially noticeable during a scene where a disguised Gwendoline enters a room of half naked prisoners all in different kinds of torture apparatus. The dangerous yet creative set design and costumes was thanks to concept designers François Schuiten and Claude Renard whose brief was to be as big and wild as possible. It is worth pointing out their original concepts were even more over the top and surreal but budget constraints reigned them in.

Needless to say, the release of Gwendoline was for many the first interaction they’d had with bondage and film’s main legacy to this day is that it made bondage mainstream just as how Jaekin’s first movie Emmanuelle (1974) explored the boundaries of sex in film. Jaekin and the concept artists are successful in creating a living, breathing underground society that conforms to the dictatorial rule of ancient Roman culture.

What I totally wasn’t expecting was a chariot race where the female slaves are the horses. It of course makes no sense whatsoever (why do the slaves keep pulling the chariots when they can just pull themselves free and make a run for it?) but it’s an amazing sight to watch. There does indeed seem to be a lot pulled from Roman history with Gwendonline also taking part at one point in a gladiatorial battle arena. 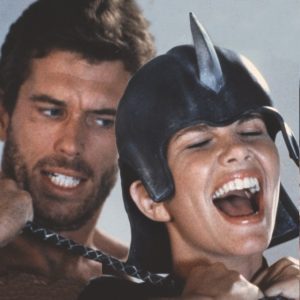 Swords and sandals and not much else in GWENDOLINE (1984)

The cast of course vary considering the leads are a combination of both American and French actors. Kitaen is okay as the naive but strong willed woman out to continue her father’s work but she seems a little lost at times with everything that’s going on. Huff is also fine as the scoundrel Willard but their interplay feels forced and stilted not helped by Jaekin’s mediocre dialogue.

The nature of shooting in France with mostly French actors meant that apart from Kitaen and Huff most of the dialogue was spoken in French, which was then dubbed later into English. As with most foreign movies it’s extremely noticeable even with good actors like Zabou Breitman. She does fare much better as Beth.

Breitman’s character is cartoonish and over the top, accentuated by her helmeted hairstyle but even with all this working against her Zabou easily outshines her co-stars due to having more acting experience. There’s a scene where she’s had enough and starts slapping her lead cannibal captive around before storming off. While the dialogue is iffy and the looped sound does her no favours she still makes a good impression. I just wish they’d synced her dialogue better.

Bernadette Lafont fares worse and she is great in the role playing the authoritarian Queen who sees Gwendoline as a threat to her status of beauty. Lafont clearly couldn’t or wasn’t asked to deliver her dialogue in English which is a shame as she is terrific in her role of the Queen. Likewise Jean Rougerie’s role as D’Arcy, a character from the original comic is entertaining as the scheming scientist who’s found a way steal authority from the Queen yet requires Gwendonline to fulfil his plans. He’s just let down by the looping which is odd considering Rougerie could speak English.

Music by Pierre Bachelet is amazing going from exotic synth embraces of the journey to the ethereal choir of the Pikaho’s destiny. The music industry is poorer without him. Ultimately the production is polished and extravagant for a foreign movie with some impressive stunt choreography and I suppose even the childish humour will appeal to some.

As a whole, it all makes you forget the plot holes like what’s the payoff with the crystals, the under developed plot regarding the volcano as a weapon or why the film ends on such an anti-climatic manner with the characters penniless and stranded in the middle of nowhere. For this to be Jaekin’s last film he certainly ended on a rather impressive and unique note even if the plot with its need for exploitation and theatrics means it comes across more as a B-movie with an art house direction and a decent budget.

The difficulties of marketing such a movie result from its themes of sexual bondage, some gratuitous violence along with a lack of familiar star names in it. Gwendoline is perhaps tonally out of step with what worldwide audiences would be willing to sit through. As mentioned at the beginning of the review the film doesn’t know what it wants to be; trying to pander to adventure fans while pandering to fans of Jaekin’s earlier film Emmanuelle.

In what would be Jaekin’s last movie he along with author John Willie have managed to successfully adapt the misadventures of its titular heroine to the big screen. Gwendoline isn’t the smartest movie made and I can understand its lack of appeal outside its own country. The source material is absurd pulp as it is and the movie manages to retain all that for better or worse. The set design and costumes grand, the story nonsense, the characters cartoonish while the film never shies away from its casual sexual references.

What then should be a complete disaster becomes an underground cult classic; an oddity that should be a B-movie yet has been professionally produced with the best resources France filmmaking back then had to offer.

It’s a mad movie but never boring and a lot easier to find than that damn butterfly. It’s certainly worth watching at least once out of interest.