No problem communicating here – COOL HAND LUKE is a classic! 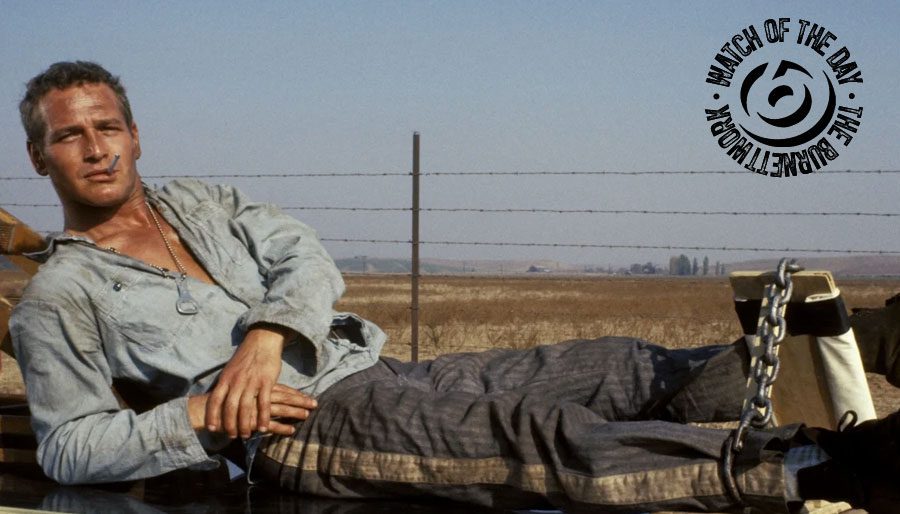 When considering films that reflected the attitude of the times in which they were made, maybe no film approaches the annoyance of authority that epitomized the late 60s better than COOL HAND LUKE. Why should this film be your WATCH OF THE DAY? Read our review.

When petty criminal Luke Jackson (Paul Newman) is sentenced to two years in a Florida prison farm, he doesn’t play by the rules of either the sadistic warden (Strother Martin) or the yard’s resident heavy, Dragline (George Kennedy), who ends up admiring the new guy’s unbreakable will. Luke’s bravado, even in the face of repeated stints in the prison’s dreaded solitary confinement cell, “the box,” make him a rebel hero to his fellow convicts and a thorn in the side of the prison officers. 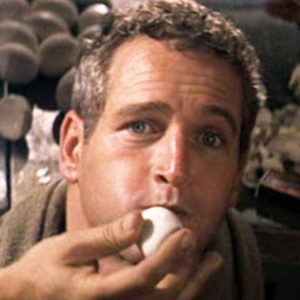 There are a number of classic films in the “prison film” genre. (SHAWSHANK REDEMPTION and PAPILLON come to mind.) But none of them capture the anti-establishment vibe of the 1960s as well as COOL HAND LUKE. Paul Newman’s Luke suffers from start to finish through this film and yet keeps the same “fuck-you” grin and attitude that both martyrs himself and flips the establishment the bird at the same time.

This film is bleak, hot and grinding – not unlike the experience of suffering we see the prisoners (and guards) endure throughout the film. But it is a joy to the end. The miserable, sufferable end.

And if you have any time at all, COOL HAND LUKE should be your “watch” of the day.

The opening scene, in which Luke (Paul Newman) is cutting off the heads of parking meters, was filmed in Lodi, California. After the filming, the city did not replace the meters, and for many years afterward, you could go there and see a block-long row of metal posts sans meters.

A Southern prison camp was built for this movie just north of Stockton, California. A dozen buildings were constructed, including a barracks, mess hall, warden’s quarters, guard shack, and dog kennels. While passing by the prison camp set, a San Joaquin County building inspector thought it was a recently constructed migrant workers’ complex, and posted “condemned” notices on the buildings for not being up to code.

In the “road-tarring” sequence, the actors actually blacktopped a mile-long stretch of highway for the county.

The fight scene between Dragline and Luke took three days to shoot. George Kennedy said they were both completely worn out from fighting and, in Paul Newman’s case, from falling onto hard ground for three full days.

When Joy Harmon filmed the scene in which the men watch her wash her car, she had no idea how suggestive it was. It never occurred to her until she saw it in the theater. “I just figured it was washing the car. I’ve always been naive and innocent”, she said. “I was acting and not trying to be sexy. Maybe that’s why the scene played so well. After seeing it at the premiere, I was a bit embarrassed.”

George Kennedy discussed how Joy Harmon’s iconic car washing scene was originally scheduled for half a day, and how that shoot ended up taking 3 days. Kennedy laughed and said “Somewhere…there’s 80,000 feet of film with Joy Harmon washing that car!”

The scene where Luke is visited by his mother needed to be filmed in one day. Given that the scene was eight dialogue filled pages long, that was quite a tall order. However, because the cast members involved, Paul Newman and Jo Van Fleet, were stage-trained professionals, it went off without a hitch.