NIAGRA is classic film noir with a shapely femme fatale. 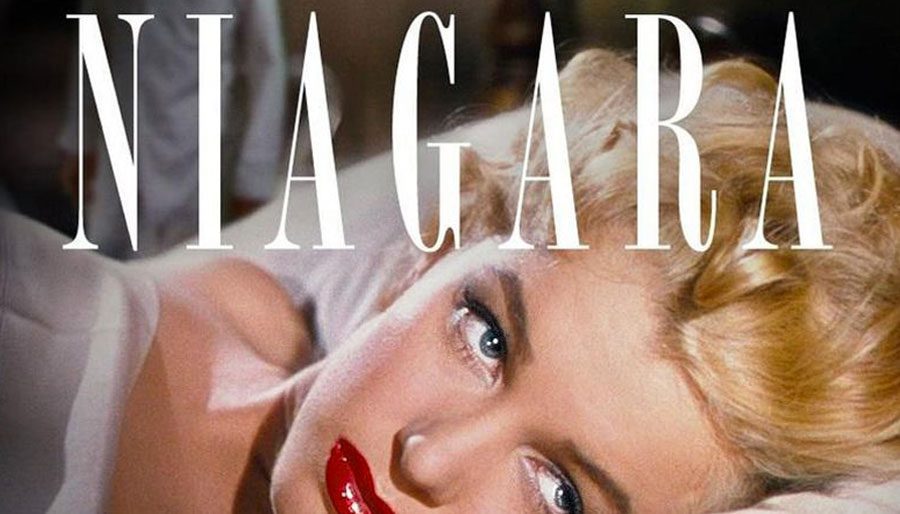 (From IMDb) Marilyn Monroe in one of her earlier roles showed she had promise as a dramatic actress that was never fully realized on screen. We all know she was fine in comedies but she acquits herself well in the role of a young wife anxious to rid herself of her jealous, mentally unstable husband (Joseph Cotten) and plots with her lover to do so. The lovers are spotted by another honeymooner (Jean Peters) who is drawn into the plot by circumstances beyond her control.

Jean Peters is excellent as “the other woman”, smart and strong-willed and able to cope with the unstable husband when she has to. Joseph Cotten by this time had played several stressed, shell-shocked veterans and does his usual fine job here. Marilyn is garbed in her most revealing wardrobe and makes the sluttish housewife a real and pitiful being by the time she confronts her husband in the bell tower.

Atmospheric film noir type of story is well photographed for maximum effect among the famous Falls. With swirling mists, choppy waters, bell tower ringing ominously, and murderous intent–it’s makes an absorbing, fast-moving melodrama that is chillingly effective and at the same time enjoyable to watch.

Rose Loomis (Marilyn Monroe) and her older, gloomier husband, George (Joseph Cotten), are vacationing at a cabin in Niagara Falls, N.Y. The couple befriend Polly (Jean Peters) and Ray Cutler (Casey Adams), who are honeymooning in the area. Polly begins to suspect that something is amiss between Rose and George, and her suspicions grow when she sees Rose in the arms of another man. While Ray initially thinks Polly is overreacting, things between George and Rose soon take a shockingly dark turn.

This was the first of three huge hits for Marilyn Monroe in 1953 – the others being “Gentlemen Prefer Blondes (1953)” and “How to Marry a Millionaire (1953).” The trio grossed over $25,000,000, making it Monroe’s most successful year of her film career. Interestingly enough, even though she had a starring role, Marilyn Monroe was still under contract to “20th Century-Fox” as a stock actor at a fixed salary, so she actually made less money than her make-up man did.