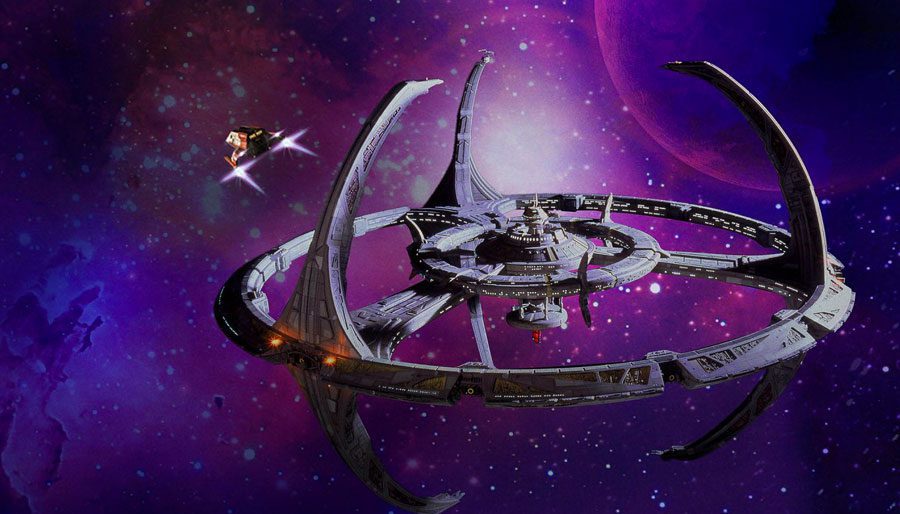 As you are aware, I’ve started my first viewing of Deep Space 9 last year. I’m currently midway through Season 5 – yes, I know that I’m slow – and I thought it’s a good time to give my current impressions of the show thus far. Going into the series, I knew that DS9 is supposedly “darker” than The Original Series and The Next Generation, that it explores more serialized storytelling, and that one of its major storylines involves a war, all of which really intrigued and excited me. 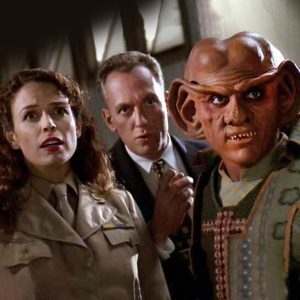 After having finished four full seasons now, it’s with great regret that I inform you that I’m currently not as enamored with DS9 as I had hoped I would be. I do not think that the show, at this point, is as good as The Next Generation. Now, the first two seasons of the DS9 were, at least in my subjective opinion, by far stronger than the first two seasons of TNG. Season 3 onwards however, DS9 just hasn’t really excelled for me. This isn’t to say, of course, that there hasn’t been many great episodes – Duet, Whispers, Past Tense, The Visitor, Little Green Men, the two-parter of Homefront and Paradise Lost – to name, but a few examples.

I liked that they revisited the Mirror-verse, which is always fun (even though it really makes no sense how all of the characters’ counterparts would even exist in the alternate universe, much less know one another, in spite of all the alterations that have been made to history). I also enjoyed the riffs that they did on other stories like James Bond (Our Man Bashir), It’s a Wonderful Life (Body Parts), and Cyrano de Bergerac (Looking for par’Mach in All the Wrong Places).

What I do really like about DS9 is its more diverse range of characters, all of whom have flaws or personal struggles to overcome.

There’s Kira, a former child soldier who is wary of the Federation’s influence in Bajoran affairs. There’s Odo, a mysterious shapeshifting alien who serves as the outsider looking in on all the strangeness and intricacies of humanoid behaviour. There’s Quark, the greedy, lecherous, and immoral businessman.

On the Starfleet side, there’s Jadzia, a being processing the memories and experiences of numerous different people. There’s Bashir, a young doctor whose overzealous nature and pompousness sometimes gets him on the wrong side of his coworkers. 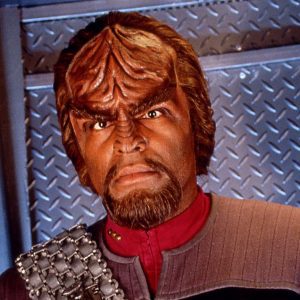 Worf, one of two characters to transition from ST:TNG to ST:DS9

There’s Worf, who – from since when he was introduced in TNG – has been caught between his Klingon heritage and his duties as a Starfleet officer. There’s O’Brien, whom the writers seem to just love tormenting, from being falsely accused of war crimes and tried in a kangaroo court by the Cardassians in Tribunal, to having his wife get possessed by an evil alien entity in The Assignment, to almost being driven to suicide after spending decades in prison in a simulated reality in Hard Time.

And there’s Sisko who, in the first ten minutes of the pilot, loses his wife in a horrific attack, and must subsequently overcome his anger and grief, and raise his son as a single father. And by having characters that start out in a darker place, the show allows for them to grow and evolve, and for the audience’s perception of them to change as well. Whereas I found Bashir to be rather annoying at the start to the series, I quite enjoy him now and the rapport that he has developed with O’Brien.

I like the relationship between Jadzia and Worf, and I find it much more organic, more believable than the sudden romance Worf had with Troi in TNG. I love the father-son relationship between Benjamin and Jake, and I think that Jake is easily the best depiction of a young character on Star Trek thus far. He is an all-around good person – intelligent, compassionate, and always supportive of his father – but at the same time, still believable as a kid, still engaging in typical teen antics and occasionally getting into trouble. If only Wesley Crusher was this well-written.

Going into my criticisms of DS9, the primary problem that I have is that the show seems to be struggling with its identity. TNG appeared to have figured itself out and was firing on all thrusters by the third season; DS9 still hasn’t, after four seasons, fully committed to what it wants to be. Does it want to focus on the overarching story, or does it want to maintain a more standalone format?

The Dominion War storyline has so far been proceeding in fits and starts: DS9 would drop promising episodes like Improbable Cause and The Die is Cast, and the aforementioned Homefront and Paradise Lost, to get me excited, and then throw cold water on me with a number of subsequent standalone episodes.

This mixed format is jarring for me; I find myself alienated by the constant interruptions in the flow of the main story, and am thus unable to get immersed in it. And while I do love that they’ve brought Worf into the series – I actually like his character much more in DS9 than I did in TNG – the whole Klingon-Cardassian war felt like filler. After so much stalling, so many false-starts and fake outs, my patience with the story is really starting to wear thin.

There is such a thing as too much foreplay, and the series has reached a point now where I’m just shouting: “Come on, get on with it!”

A more minor issue I have is that I find (no pun intended) the Founders to be uncompelling antagonists. Now, I do love the fact that they are shapeshifters, and I think that DS9 has done a great job of illustrating the difficulty and paranoia that comes along with fighting an enemy that can take the form of any person or object they want.

However, I think the overall characterization of the Founders, at least up to this point, is a bit flat. On one hand, we’ve had enemies like the Romulans, Klingons, and Cardassians, who are imbued with colourful personalities and cultures, whom we are able to understand and sometimes even feel empathy towards. On the other hand, we’ve had an enemy like the Borg, who, to borrow a quote from Terminator, can’t be bargained with, can’t be reasoned with, doesn’t feel pity, remorse, or fear, and will absolutely not stop until they’ve achieved their goal of assimilation.

The Founders are neither; they are not the unfeeling juggernaut that made the Borg so terrifying, but they also lack the personality and humanity of the humanoid antagonists to be likable or sympathetic. Their primary motivation – they are paranoid xenophobes hellbent on galactic conquest – feel uninspired. I just find them to be bland.

I’ve gravitated much more towards antagonists like Kai Winn, Gul Dukat, and the Maquis, who are more fleshed out, whom I find to be much more compelling because they possess the complexities and nuances of real people.

Keeping an open mind about the future

As I’ve stated off the top, I’m now about midway through the fifth season, and while I’m still unsure where they are going with the Dominion War storyline, I am really enjoying most of the standalone episodes. And perhaps I’ve gone into DS9 with unfair expectations of what the format should be, after being accustomed and conditioned to the serialized storytelling of modern day.

I will write again after I’ve finished the final two and half seasons to give my thoughts on the series as a whole.