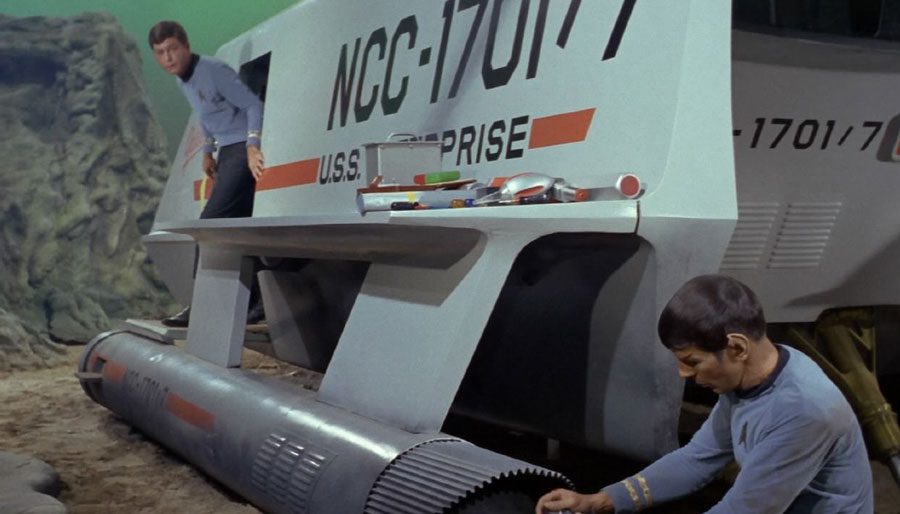 Imagination Connoisseur, Christopher McCullough, explains how all of these factors are exemplified in the episode “The Galileo Seven.”

Before the subject slips into total irrelevance I thought I’d share what to me makes Star Trek special in terms of popular culture and why I think, beyond many more superficial elements, Star Trek: Discovery and Picard, are entries that fail to connect with a lot of Star Trek fans.

I was introduced to Star Trek because my father loved watching the first series growing up and shared that enthusiasm with me, he and I would watch TNG together and what few episodes of the original series he hand, on tape or that rarely were replayed. I enjoyed the old show even then but I never really understood why my dad would still prefer it over The Next Generation, that is until we happened to watch a particular episode of the original series; “The Galileo Seven”. 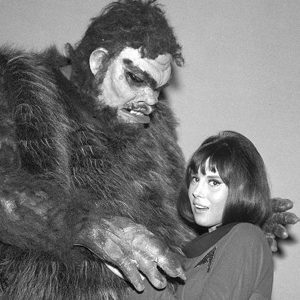 An crewmember from the USS Enterprise poses with a native from Taurus II who, it appears, either smells bad or getting a little too “familiar” with his guest.

For the uninitiated, (or people like me who never remember the titles of these things) this is the episode where an away mission led Spock is forced to make a crash landing, unable to communicate their location to the Enterprise and under duress from hostile native lifeforms, they are forced to improvise a fuel source for their shuttle, Galileo, and take off from the planet, but this is only the beginning of a new and equally terminal conundrum; their improvised fuel source will only keep them in orbit for so long before their orbit decays and they burn up in the atmosphere.

The watchers have been following the story from two perspectives, the away team, and the Enterprise, whose perspective of the affair is only that the Galileo plummeted out of comms and has failed to make contact, after hours of searching Cpt. Kirk is coming to terms with the fact that his friends are dead and the amount of time he can, as a Captain, delay in their search is running out.

This is a great way to ramp up tension as we see both crews trying to work out each other’s S.O.P.; for Kirk we see him coming to the understanding that there is no conceivable way to find one shuttle with a whole planet to look over; “Finding a needle in a haystack would be child’s play”, and for Spock we see him coming to the same realization. Even if, illogically, the Enterprise is still looking for them, in the time they have left there is no recourse but an act of desperation. Venting the shuttle’s remaining fuel ignites a flare that, seconds from warping away, is picked up by the Enterprise’s scopes, saving them.

There’s a lot going on in this episode, but for me it was such concepts as: Escape Velocity, the immense, and typically unacknowledged, distances involved in space, and Orbital Decay, that struck me; particularly this last one. Something about the term ‘orbital decay’ made me ask if it was real; I’ll paraphrase my dad’s response “you’ve just taken your first step into a larger world”. 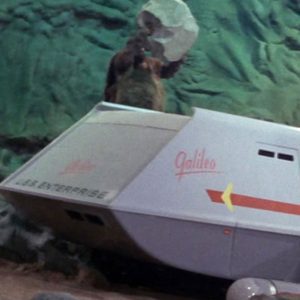 Working out a way to break atmosphere, devoting serious time to “fuel”, orbital mechanics, the constant drive to act in the most efficent and logical way, and having that still only make your chances of survival better; this might not be my favorite episode of Star Trek but it is so fucking Science-Fiction. And it was on television in 1967. Precious few have been the television show that even attempt to do the same. If the plot about a crew desperately fighting against orbital decay sounds familiar it was a major plot point in the last season of The Expanse, you’ll have to tell me if something similar has come up in Discovery or Picard.

But this is still only half the equation. Star Trek has always been a ‘big tent’ franchise, for every Galileo Seven there’s a Spock’s Brain or Piece of the Action. With TNG the tent only got bigger. Among the ‘science problem’ episodes you had, holodeck episodes that could border on Cyberpunk, political intrigue, episodes with Troi, usually involving what my dad would call “touchy feely” subjects, and…Space Zombies!

There has always been this diversity of story type in Star Trek, my dad might not have enjoyed episodes that dipped into the softer side of Sci-Fi or out-and-out magic, but the people facing these travails were at least still Starfeet, and, what I think is key here, that story would end with that episode. The original series and The Next Generation were episodic television, there might be long simmering arcs that would appear in a b-plot here and there, before their climax in a two-parter, but for the most part, the story began and ended in one episode, if you weren’t a fan of a Lwaxana Troi episode, if wouldn’t overstay its welcome.

This is why I think Discovery is so divisive, It’s one, season long, episode of a type of Star Trek that you might have been able to enjoy on occasion before, but saddled with it like this, begin to resent.

There’s another conflict that goes on in Galileo Seven, Spock’s impersonal command style causes friction with his crew, who chafe at his implacable treatment of their dire situation, to drive this point home, Spock’s foil, Dr. McCoy is present to drive home the point. The push and pull between these two poles is the coda to the episode, Spock’s last desperate gambit is cast as an irrational action by McCoy (and most of the crew seems to agree), but for Spock it was merely the most logical course of action with the choices given.

It’s up to your personal beliefs to choose who is right, though the episode itself seems to side with McCoy’s camp. This dichotomy between the highly rational, objective, but impersonal actor and the irrational, subjective but empathetic actor is a common refrain in science-fiction. For people who we might call traditionalists in their tastes toward Sci-Fi (though that term seems misleading) subjectivity is one of the antagonists of our stories, allowing your decisions to be influenced by ‘faith’ in an outcome opens up your world to some less than desirable things, ask any of those ‘evil’ admirals who acted out of fear, hubris or vanity.

Neither Spock nor McCoy is supposed to be wholly the answer to every problem encountered but their synthesis is, usually in the form of Kirk. Spock thinks, McCoy feels and Kirk acts, and if any one of them were to overtake the dynamic of the show it would become unbalanced.

I had more to say on this last point but considering what a hot button issue sci-fi fandom seems to be, I might have to give it more thought. What is “sad puppies”, Rob?