Is the transporter just a murder-machine?

Many episodes ago, you responded to my question about whether or not the transporter is actually a murder-machine. Recently, I came across an excellent short story called “Think Like A Dinosaur” that led me to giving this question some more thought.

In the story, humanity has gained access to the stars, thanks to the help of a reptilian alien race. The dinosaur-like aliens have mastered a technology that allows the user to “teleport” from one planet to another. Their “transporter” scans a subject, creates a pattern of that subject, and transmits the data to a receiving station at the target site. There, the pattern is used to create an exact duplicate of the subject, right down to memories and experiences. As far as the newly created duplicate is concerned, he or she is the same person that entered the transmitting station at the start of the process.

As the story progresses, things go awry when a malfunction occurs. You see, the scanner is supposed to immediately disintegrate the original subject once successful “transportation” has been verified. Unfortunately, in this instance, there’s a delay in confirmation of transport. As a result, the disintegration doesn’t occur.

Later, the aliens learn that the pattern WAS successfully transmitted, and a duplicate created. To the aliens way of thinking, the subject now exists in two different locations at the same time. To them, this is an unacceptable paradox, and the only solution is to “balance the equation” by eliminating the original subject. Unfortunately, the subject, now having had time to think about things, feels differently. Shenanigans ensue.

This strikes me as being uncomfortable close to how transporters work in Trek, except for the fact that in Trek, the subject is disintegrated BEFORE the duplicate is created on the receiving end, eliminating the possibility of the original subject having second thoughts.

Some might argue that in Trek, the “pattern“ isn’t really a diagram of how to build a duplicate of the subject, but is actually the subject itself, only converted into energy. This energy is then beamed to a remote location and then converted back into matter. In this equation, matter isn’t created or destroyed, but rather, is converted into energy at point A, transmitted, and then reconverted to matter at point B.

I’d argue that this isn’t what happens. 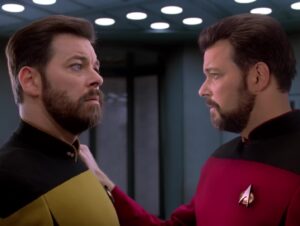 In the episode, we learn that before becoming First Officer on the Enterprise, Will Riker was involved in a transporter accident that resulted in there being TWO Rikers. How is this possible if matter isn’t being created? Does each of the new Rikers have half the mass of the original? Of course not. The transporter scanned Riker and created a pattern, but due to the malfunction, it used the pattern to create TWO copies instead of the customary ONE.

There’s also the TOS episode “The Enemy Within.” If I remember correctly, contamination from magnetic dust causes a malfunction in the Enterprise’s transporter. This results in the creation of TWO Kirks. Granted, the copies aren’t perfect duplicates of the original, but they ARE two individual beings, each with the same memories as the original, and each believing that he is the “real” Kirk. In the end, the duplicates are “merged”. Translation: The PATTERNS of the duplicates are merged, allowing the transporter to create a single copy that matches the original Kirk.

So here’s my question: In the future depicted in Trek, has everyone learned how to think like a dinosaur?

I look forward to hearing your thoughts on this.
Thank you for continuously providing entertaining and frequently thought provoking content.