Is the pandemic dictating the movies we make?

Ozark Matt, an Imagination Connoisseur from the St. Louis area, writes in to ask if the PGS thinks COVID-19 is going to force the hand of film makers and TV showrunners to cut down on extras and limit cast size, among other things.

Rob,
I’m sure you have read some of the latest news articles about the near-future limitations involving film production.

Crowd scenes are out for a few years. Extras will not be needed. Interior scenes with many people are also out. This means the pandemic, essentially, dictates your plot. The virus is now part of filmmaking so much that it might require an actual credit.

We won’t be seeing tv shows where the protagonist must navigate a crowded bar, for example. No airport arrival shots, no singing in church, no public transport scenes, or simulated sports events (think THE DARK KNIGHT RISES) (imdb).

This means that the exterior shot will reign. Outdoor locations will seem optimal as indoor venues are not welcoming film crews inside. Perhaps, we can usher a renaissance of outdoor filmmaking, building on past decades.

I am a photographer who loves travel. I enjoy visiting locations of past productions. Recently, I was in Las Vegas, New Mexico where the 80’s Cold War classic RED DAWN (imdb)  was filmed. Do you have a personal favorite location you visited from a movie we have all seen? I would love to explore the vast Nefud Desert showcased in LAWRENCE OF ARABIA (imdb).

Can you comment on outdoor film production in general? What are the challenges that a casual film fan might not realize? Light is a huge factor. BARRY LYNDON (imdb) is a good example of plowing through a constant changing daylight in an unfriendly, unpredictable outdoor film environment.

Is on-location exterior filming more or less expensive than a traditional studio space? I would guess the studio is more costly, but travel and logistics must add tremendous cost.

How differently does a crew work when they are not supervised by studio bosses in a physical realm? Do they still send regular dailies back like they did in the 20th Century, or has that changed?

Your average crew member, do they prefer working close to home in a studio or is the opportunity to get out of town and make art exciting to production staff?

I grew up in St. Louis, Missouri. Home of the on-location epic ESCAPE FROM NEW YORK (imdb). I can recognize many outdoor locations in the city that have changed over time and some others that have remained a recognizable backdrop for a dystopian John Carpenter film. The Air Force One crash site with orange escape pod exterior location has not changed much in decades.

The train cars where the President was being held hostage are in exactly the position on tracks in the main yard behind iconic St. Louis Union Station. The final climactic action scene was filmed on a still functioning Mississippi River bridge connecting Missouri to Illinois just north of town. 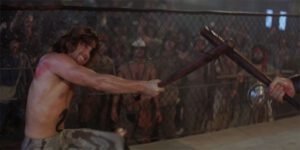 Escape from NY’s Snake Plissken (Kurt Russell) fights to the death at a location that’s now a swanky bar.
“So, what’s a guy gotta do for a drink around here?”

The wrestling ring location where Snake battles to the death is currently a very fancy hotel bar and lounge, yes, this is an interior scene, but it used an existing public building that anybody can visit today, sit down, have a drink, look around and be submerged in verisimilitude; all PGS folk should stop by and check it out if ever in St. Louis for an afternoon. I estimate a full 70 to 80% of the entire film was shot on-location here, including all exterior and interior scenes.

Thanks, for being a cool dude one can hang with virtually and celebrate all-things cinema.