IRON MASK is so bad, you won’t want to miss it. 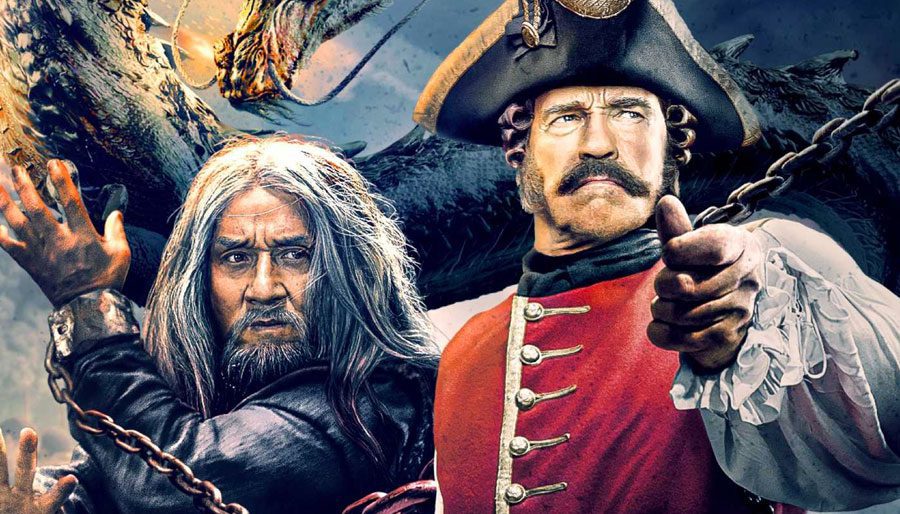 Imagination Connoisseur, Mark Churay, writes in with his impressions of the Jackie Chan/Arnold Schwarzenegger film, IRON MASK, which Mark says is so bad, you don’t want to miss it.

Back in August I saw a trailer for the most bugnuts movie ever, called IRON MASK which leaned on Arnold Schwarzenegger and Jackie Chan to promote the film. It had scenes in some sort of prison and then scenes that look like they came straight out of a mythical Chinese Zelda type video game.

Well, this movie has hit home video and I final got to watch it. Is it any good? NO, this movie is a terrible mess but in the greatest way possible.

One of its main drawbacks is a terrible mix. If you have a great stereo system that allows you to manipulate the individual channels, turn up the one with the dialog and back off everything else just a tad. Otherwise, if you have my hearing, you might be using the captions.

Now, what is the IRON MASK?

This is actually a sequel to a 2014 Russian produced and directed film called VIY or THE LOST EMPIRE starring Jason Fleming. He is one of the main actors here, despite what the marketing campaign says. Fleming is an 18th Century Cartographer charting Eastern Europe. Something happens and at the beginning of IRON MASK, Fleming’s character is in a Russian prison but not the one in the trailer ran by Arnold. I believe that’s the Tower Of London and it houses the man in the Iron Mask, who claims to be Peter the Great.

Fleming’s fiancee, in England,, receives a letter from him, sent via pigeon, from Russia which sets in motion a bizarre series of events that sees everyone escape from their respective prisons and head towards China, only to find out its being controlled by a Chinese witch who wishes to become wealthy and powerful, by selling this Chinese healing tea which gets its nourishment from the eyelashes of a dragon.

Yes that was a lot of run on sentences, but on purpose, are you still with me?

If you think I’m having trouble explaining this, I’m not. This movie is all over the place. The visual effects are of a Nintendo Switch video game quality and again it has a bad mix.

It screams grab some corn, get baked, and watch a really fun train wreck. You will sit and wonder, how much vodka, LSD and mushrooms were consumed to create this?

The fact that this is a sequel, makes me want to find the first one. Was it a better film? Did the director sell out and become commercial? And, holy shit there’s going to be a third one.

I am reminded of a movie Quinten Tarentino brought over to the states call ZU WARRIORS back in 2002.

I know this review is kind of all over the place, fitting because the film is as well. So, if you have a fondness for CUTTHROAT ISLAND, if you enjoyed BUBBA HOTEP, if you think MEGAFORCE deserves more respect or if you got enjoyment out of the kung-fu Kangaroo movie that was WARRIORS OF VIRTUE…I recommend this.

If the movies above cause your eyes to roll into the back of your head, this one isn’t for you.

Can’t wait to make this a trilogy,
Mark C.