Great art can exist on many different levels … and lots of letters. 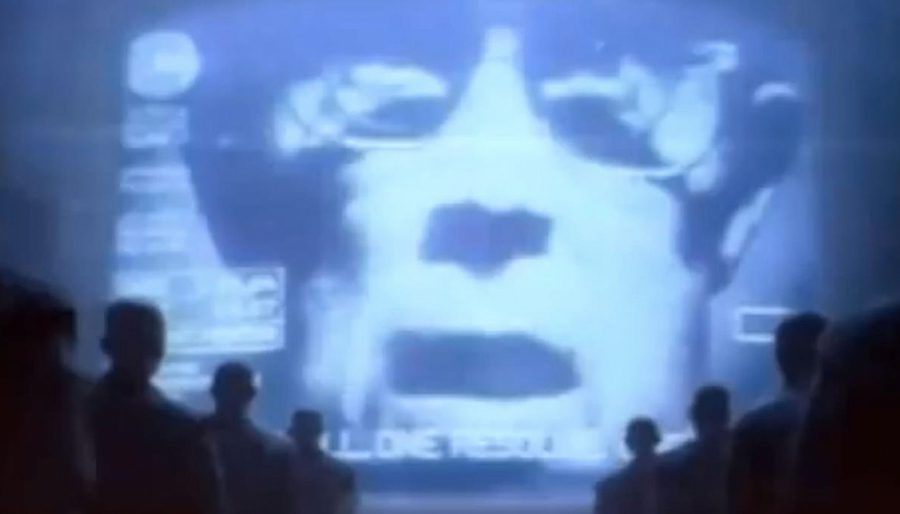 Big-time film directors like John Landis and Ridley Scott have made their name on smaller productions like television commercials (Apple’s 1984 spot) and music videos (Michael Jackson’s THRILLER). Plus letter writers ask a number of other questions in today’s mailbag.

I know how filmmakers are more well known for the movies they directed, but I always get a good kick when I check out the stuff they do outside of movies.

Ridley Scott is known for making movies like Alien, Blade Runner, Gladiator, and others, but I particularly like a number of commercials he did, like the 1973 Hovis bread commercial called “Bike Round” and the 1984 Apple Macintosh commercial. 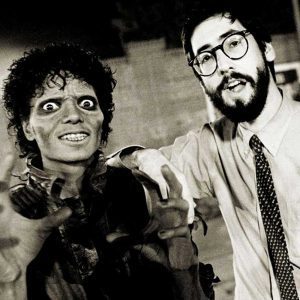 Tony Scott is known for movies like Top Gun, True Romance, and others, but I do like the commercial he did which got him the job to direct Top Gun, the 1983 Saab commercial “Nothing On Earth Comes Close”.

John Landis is well known for movies like Animal House, Blues Brothers, An American Werewolf In London, Trading Places, and Coming To America, but I do like the 2 Michael Jackson music videos he directed, Thriller and Black Or White.

Brian De Palma is known for movies like Carrie, Dressed To Kill, Scarface, The Untouchables, Mission Impossible, and others, but I did like watching the Bruce Springsteen music video he directed, Dancing In The Dark.

I don’t know about you, but that’s just me, where I get a good kick out of see what filmmakers do outside of the movies they are more well known for.

Where should the PIRATES OF THE CARIBBEAN franchise sail to when it’s re-booted? 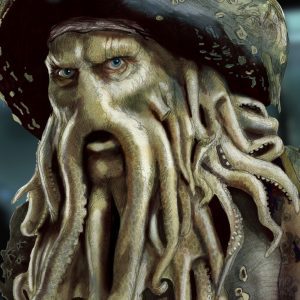 Fan favorite villain, Davey Jones, from the PIRATES OF THE CARIBBEAN franchise

I was listening to you and John the other day and you mentioned you were a fan of The Pirates of the Caribbean franchise, You mentioned that you liked the 1st and 3rd Film which was the Curse of the Black Pearl and At World’s End. I also like those but I feel that the second and third film could be counted as one as both films were shot back to back and they feel like a cohesive unit.

The reason I want to talk about this is because my favorite movie villain is Davy Jones , from the way he looks with his tentacle beard and giant crab claw hand, his accent and intonation, and his presence onscreen of dread, he really is menacing for me. Except in the third movie where he was Beckets mongrel pup.

Also, his backstory of being a sadboi who got his heart broken by Calypso turning him into a monster really hits me.

When I heard the news that they were Rebooting the franchise I was a little sad because in the Last Film’s post credit scene (which not many people know about) they hinted for a Davy Jones comeback as Will Turner is having a nightmare of Jones coming for vengeance as Will left the Dutchman to stay with Elizabeth.

I wanted to know whos your favorite villain in the franchise. Also if you think a reboot is better than continuing a sequel with Jones and Will.

First of all, how amazing was to be on live at the last Midnight Metal. Go for with those 3 movies. I will support that idea.

So, today I send another letter, because, contrary to what I thought possible, there are people that don’t like Joseph Kosinski’s film OBLIVION (2013), with Tom Cruise, Morgan Freeman, Andrea Riseborough, and the very beautiful Olga Kurylenko.

Returning to the initial question, how wrong these people are, and I even know some of them personally. OBLIVION is perfect in all aspects. 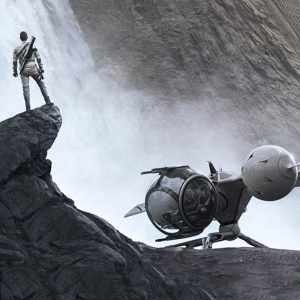 The Tom Cruise sci-fi picture, OBLIVION, is noted for its remarkable take on a future that is very, very real

The visuals are amazing, How cool is the art and the technology used in 2077. That house suspended in the clouds is a dream of modernity and architecture. Here is a link for the amazing collection of Concept Art, by Andrée Wallin and Thom Tenery.

But this film still has the courage to present us as an alternative to all this art and architecture, a simple house by the lake, challenging us to a choice, in what environment would we prefer to live?

Another point where you can see the passion and dedication that was given to that kinda … well it looks like a helicopter … the Bubble-ship.
Rob, you should buy the Oblivion bubble-ship model for your amazing collection. Maybe you already have it.

OBLIVION also presents us, as if it were a set of postcards, the destruction that the planet Earth suffered, to the point of this twisted and ruined landscape reaching even a strange, dramatic, even melancholic beauty.

Oh, I cannot forget this. the music of this film, is excellent.

About the argument, I wanted to highlight 3 things.

One is that OBLIVION gives not only one, but even several surprises, without having to subvert our expectations.

The second is the fact that the ship originally investigating the Tet was named Odyssey, which alludes to Homer’s epic poem and its hero Odysseus. The Greeks win the Trojan War by way of the Trojan Horse, much like how humans defeat the Tet because it allowed Jack to bring a captive without realizing he is also bringing a bomb.

History has a tendency to repeat itself, when it is ignored or forgotten. The problem is that the Tet did not know the story of the Trojan horse.

Also, the Tet was not able to understand one of the best characteristics that we, human beings have, the ability to take actions as individuals and not as something collective, and above of all, of being sometimes willing to sacrifice ourselves for noble causes.

And it is in this sense that I arrive to the third point. The best scene in the film, the dialogue between Jack and Tet (aka Sally). Part of Jack’s speech is taken from a book “Lays of Ancient Rome” by Thomas Babington Macaulay.

This is what Jack says to Sally:

Thank you, Robert, for reading another long letter.

Is it time we start considering “cinema” as something different than “movies”?

It’s been a while since my last letter, hope you are well, and it is great to hear that movie theaters are reopening in the States again. 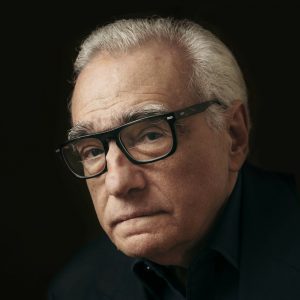 I’ve been going through a few older episodes of the John Campea Show as well as Robservations, and what caught my attention was the topic of Martin Scorsese’s comments that Marvel movies are closer to theme parks than they are to movies, and that they are “not cinema”. Plus there has been a topic on my mind and that is how the movie industry has changed post-pandemic, and what does the movie theater experience mean post the streaming age.

For starters, I can see where the legendary director comes from. Cinema in its art form is telling a human story through a series of dialogues & pictures with a variety of cinematography techniques in order to further elevate the human experience and understanding of ourselves and our psyche and evolution. The Godfather, Lawrence of Arabia, Casablanca or 2001: A Space Odyssey are all Cinema. They tell compelling stories that enrich the human experience with lessons and values (and yes, entertainment) and allow us to engage emotionally and intellectually.

It is difficult in the modern times to watch such stylized movies in the present. A movie like Silence (2016) originally based on the book (as well as the 1971 movie) isn’t your typical Scorsese film, but it is Cinema. A movie like The Professor and the Madman is Cinema. Joker, oddly enough a superhero movie, is Cinema. Christopher Nolan movies (including Dark Knight Trilogy) are Cinema. Whereas the MCU movies, as much as I love them (particularly Dr Strange & Endgame), are NOT Cinema. They are blockbusters that engage us, but little do they tell the story of the human experience. And yes they are theme park rides that excite us and make us want to go back to get our entertainment fix. I don’t find what Scorsese said about them to be offensive. Rather it is an opinion of a giant who has been in the industry for over 40 years, and it is just, in his words, “not for him.”

Something I noticed John Campea keep saying is “movies are subjective,” I respectfully disagree. It it our perception that is subjective; whereas our collective opinion becomes objective. Society as a whole determines the value of movies and its impact on our cultures. My concern is that with the current economic model of the movie making industry and the boom of the streaming industry, is leading to THREE main changes:

Having said that, I certainly don’t want all my movies to be Apocalypse Now, or The Man who would be King, or Braveheart or A Few Good Men. I don’t mind a Commando, Mortal Kombat or even Death Becomes Her every now and then. And I certainly don’t mind the MCU, but my concern is that the movie theater will to limited to them and that the new generation won’t have opportunity to experience classical Cinema that I got. (Same thing goes for modern Trek. God it’s awful!!)

Not at the risk of being “old man yells at the sky”, but it is the same as the Renaissance Art form versus the Modern Art. Both are art, but different forms of art. To appreciate the present form, the old needs to be understood and appreciated. But if we keep with the modern one only, our pallette could be ruined, and if we stick only to the past we’ll be outcasted.