No free pass for FREE ENTERPRISE from this reviewer. 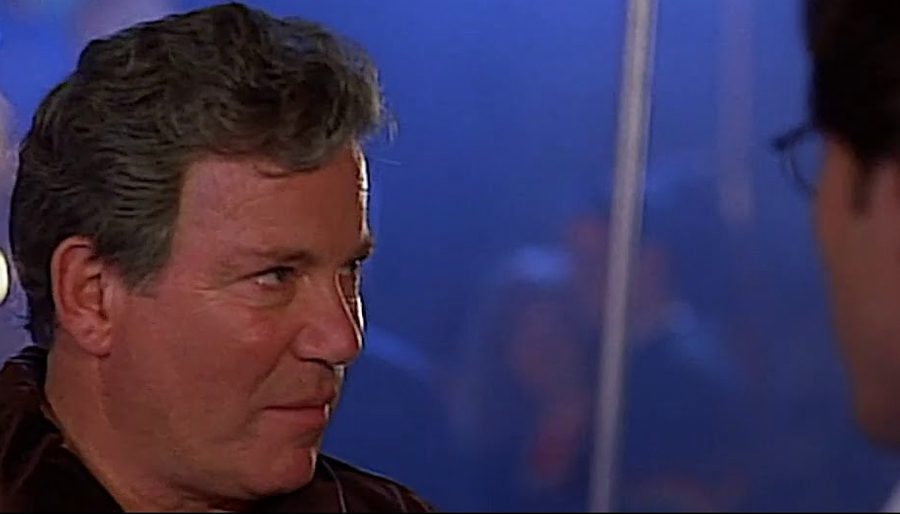 Imagination Connoisseur, Pedro Ferreira, turns a critical eye to FREE ENTERPRISE, co-written and directed by Robert Meyer Burnett. So how does the movie hold up more than twenty years after its release?

It’s not easy being a geek who’s interested in sci-fi, fantasy and generally the fantastical. When you’re not being picked or poked at for your devotion to what you see as cool you’re putting up with horrible state of your beloved franchise because dammit you know you could do a better job. Robert Meyer Burnett’s look at the struggles of the average Star Trek fan in Free Enterprise (1998) does exactly this.

Written by him and Mark A. Altman the movie sets out to explore how one television series in particular has shaped the lives of its fans. The making of this movie was no incident. Jon Favreau and Doug Liman’s Swingers (1996) had given rise to the twenty- something culture fans, in this example swing music. 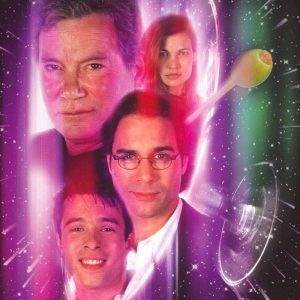 Like that movie, Free Enterprise had a fairly small budget with both Burnett and Altman hoping for but never really expecting William Shatner to agree to be in the movie. He did end up agreeing to be in it after they developed his character and made it somewhat biographical to what was going on in Shatner’s own life. Although some of what we see of Burnett’s Robert and Altman’s Mark along with Shatner persona onscreen do indeed share autobiographical events for the most part these are fictionalised versions of themselves. Free Enterprise unfortunately couldn’t compete with the bigger, contemporary movies of the year and flopped. In an ironic twist of fate however the movie gained a cult following (thanks to VHS and DVD) mirroring how the original series Star Trek (1966-1969) gained appreciation back in the day.

Mark (Eric McCormack) and Robert (Rafer Weigel) are two geeks who like to prioritise their interests over relationships or work. Mark is editor of a cult sci-fi magazine while Robert has a job editing B-movies yet neither is happy with their lives. Their main interest is the original TV series Star Trek. While bringing them joy it’s also brought them problems with their girlfriends. The people they go out with just don’t seem to appreciate the adventures of Captain Kirk.

When Mark and Robert bump into Captain Kirk himself (William Shatner) they can’t believe their luck until they find out he’s not quite what they expected. Shatner is eager to do a one-man musical of William Shakespeare’s Julius Caesar which Mark knows is a bad idea. Meanwhile Robert meets Claire (Audie England); he’s excited to finally have found someone who shares his love of comics, old sci-fi movies and TV shows. Mark and his friends who feel neglected by Robert’s new relationship wonder how long it can last but not everything is rosy with Robert’s new relationship as well.

Will Robert spiral into losing his new love and his friends all in one go or can Mr Shatner (or as his friends call him ‘Bill’) come to Robert’s rescue with relationship advice? Of course he will because as every Star Trek fan knows it’s the human thing to do!

In retrospect some will say Shatner makes the movie what it is. No doubt his fictional performance of himself is fun, often melancholy yet the film isn’t about him but about Mark and Robert’s growing older without understanding responsibility or at times reality around them. Eric McCormack who was on the cusp of becoming famous for sitcom Will & Grace (1998-2020) and Rafer Weigel (who had just come off doing Star Wars Dark Forces II: Jedi Knight (1997) somehow manage to make their characters both lovable yet completely unlikable at the same time.

Robert and Mark treat women like objects for their pleasure and seem more interested in their hobbies than committing to a relationship with someone who might not put up with those hobbies. The introduction of Audie England’s Claire offers hope for Robert but we know this early in the movie that disaster of some kind will strike. Outside of a fairly large group of friends they’re made fun of for idolising Shatner’s Kirk. Two amusing scenes at the beginning show how as kids they received separate visions of Shatner giving them advice. These visions united them into being close friends with an unhealthy obsession with Star Trek.

The film does makes some story and character errors here and there in what it’s trying to say, which isn’t helped by the various flashbacks during the movie not allowing us to see the beginnings of their friendship. Trekkies or geeks in general aren’t always shown in a favourable light. We are meant to laugh at those two as they hang out with their friends at their local Toys“R”Us where they lecture kids about leaching onto franchises like Star Wars (Shadows of the Empire (1996) of all things)they never were alive to see on release; generally being territorial towards younger generations.

Robert can’t believe Claire likes comics because she’s a female. It’s actually Claire who provides Robert with a much needed wake up call, telling him not only that females can like comics but that he needs to show some responsibility in life in order to provide security for others. Free Enterprise also makes a point in one scene of having Robert argue with a girlfriend about his love of Star Trek. She feels it’s an obsession while he argues her owning fifty plus shoes aren’t any reason to criticise him.

It’s a fair point Robert brings up: for all the flak Star Trek fans get being obsessed about a TV show is no different to being obsessed with a sport like football or baseball. The problem here is the script doesn’t attempt to string this thread across the movie. Instead questions are raised as to whether Robert and Mark need a reality check. Weigel is great as serial sponge Robert who puts himself first above anyone else. He won’t pay for anything because he’s always broke, asking for handouts any moment he gets.

Late in the movie his whole life comes crashing down when he not only loses his job, his true love Claire but also his apartment. Everyone can relax because he hooks up with his friend Sean (Patrick Van Horn) which leads to a hilarious moment where both of them and Sean’s girlfriend are in bed together. Sean of course doesn’t mind one bit since he was feeling neglected by Robert due to him spending more time with Claire.

Interestingly Patrick Van Horn was in Swingers, which as mentioned was partly the inspiration for this movie. McCormack is awesome as psychoanalytical Mark. The man is incredibly articulate; his delivery like he’s reciting a film script but he’s miserable; constantly complaining to Robert about his own life problems and fearing his upcoming birthday because he’ll turn thirty. He’s fooled himself into thinking his life will end at thirty because of the film Logan’s Run (1976) which leads into an enjoyable dream sequence of Mark being chased by Robert in full Logan’s Run gear complete with blinking palm light.

For many the reason to watch the movie is seeing Shatner send himself up as a drunk who wants to be taken seriously as a thespian. His continued idea of having Sharon Stone in his project is a funny reoccurring joke. He feels worried to begin with, being stalked in a bookshop by his two major fans but seeing an opportunity to stage his absurd version of Julius Caesar he’ll happily embrace fandom. They both know it’s a ridiculous idea but want to look after the project if it means keeping in touch with their living legend.

Shatner’s part is limited but when he’s onscreen he shines whether it’s getting drunk, hanging out with his homies doing a rap version of William Shakespeare’s play (that has to be seen to be believed) or trying to make a new start with someone; in this case Marlena (Deborah Van Valkenburgh) who can see through Shatner’s charm offensive a mile away. Still, in its original release it remains a confusing movie. The editing or the dialogue doesn’t always do the film any favours. The very first scene involves Mark pitching an awful horror adaptation of The Brady Bunch (1969-1974) to a studio head yet there’s no real funny punch line to the pitch.

The opening credits we get after are a collection of strange psychedelic shapes set to some 60’s jazz music. It doesn’t have any resemblance Star Trek or the movie that follows after. Scott Spock’s music never entirely seems fitting for a movie about the Star Trek fandom. In fact the actual message of the movie was left out of the original theatrical release in which Shatner towards the end tells Mark and Robert how liking Star Trek is fine but they need to incorporate reality into their lives; to become a better person than who they watch on TV. He tells the true story of coming across a burning house and feeling his duty as Captain Kirk to rescue a boy thought trapped inside only to come out ridiculed. He knows his Julius Caesar project is stupid but he has to try anyway. He can’t be the hero Mark, Robert and fandom have made him out to be but he has to try to be better than he is. This guys is the theme of the movie and I’m not sure why it was left out of the original theatrical cut but it’s sorely missing.

Free Enterprise as discussed isn’t without its flaws. Either through the script or editing it’s not entirely clear to the audience watching at times what the movie is trying to say about geeky obsessions; at least not in the theatrical version. However, this is a movie where the good outweighs the bad; though the movie has issues it remains a charming comedy about how the love of a TV show can both limit a person yet ultimately force them to achieve better.

It’s just my opinion but that’s a pretty inspiring morality tale to beam up to.