Filmmaking for the sake of making films

Imagination Connoisseur, Joe Lemieux, shares his journey from geek and monster movie freak to independent filmmaker and makes the point that for indie storytellers like himself, it’s not about the money.

The more I watch your show, the more I feel that we are both cut from the same cloth.

I apologize if this is long-winded.

I was born in Quincy, Massachusetts in 1968, and grew up a fan of classic horror and Sci-fi. The original Star Trek, Twilight Zone, the Planet of The Apes saga, Creature Double Feature on channel 56, and reading Famous Monsters of Filmland magazines. Seeing Star Wars in 1977 forever changed my destiny. I became a total fan of anything created by George Lucas and Steven Spielberg. Watching movies in the nineteen eighties became my fuel to one day make movies.

I have been making independent films for 29 years.

I first took the leap into film in 1994, volunteering as a P.A. on Stephen Kijak’s Never Met Picasso, which lead to other P.A. gigs. In 1995, I took a train cross country from Boston to Los Angeles. It took six days to get out there, but it was totally worth it. To quote Joe Gillis from Sunset Boulevard, I wanted “to take a crack at Hollywood.” I attended Son of Famous Monsters of Filmland in Universal City, which, as a lifetime geek, was amazing. 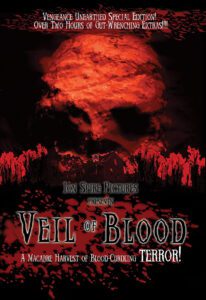 To me it felt like entering The Emerald City, there was even a couple Munchkins there too. Meeting Joe Dante, John Landis, Ray Harryhausen was a thrill, and I also had dinner with Forest J. Ackerman AKA Uncle Forry. I met Ray Bradbury there, and later hung out at his house I wasn’t able to survive, so six months later I returned to Quincy, and a year later I attended Full Sail University to get my associate degree in film and television production. Three years later, I had an interview with Lloyd Kaufman at Troma Entertainment, but I wasn’t able to afford rent, even in Hoboken.

I returned to Quincy to form my own production company, Ion Spire Pictures, for which I produced and directed two feature films: Creeping Paralysis and Veil of Blood. Creeping Paralysis was shot guerilla-style (AKA without permission) at a huge warehouse, when I was the security guard there. I shot the ending first, in case I got fired. Veil of Blood took six years to complete, and we had a midnight premiere at the Coolidge Corner Theater, complete with hired protesters out front with picket signs.

In 2012, I produced and co-wrote my third feature, The Stoop, a love letter to the B&W films of Billy Wilder and the French New Wave. It won my first award for best screenplay at the Shawna Shea Film Festival. Since then, I have been shooting shorts and formed a new production company, Dream Apex Pictures LLC, with fellow filmmaker and friend Michael Neel.

I’m currently producing a creature feature for a new streaming service coming out New England called Pivott. It’s called The Other Side of Midnight, with a horror hostess named Ursula Grimsworth and puppet co-hosts Wilton and Wilmouse. Dream Apex is in production on an adaptation of Lovecraft’s Celephaïs, which we hope to have done after the COVID-19 pandemic is over.

You are totally right, people who don’t know how to make movies think it’s about making money. Unless you’re a studio, money is not the driving force. We make movies because we love movies!

I know you love physical media, so I would be more than happy to send you DVD copies of my films.

Keep up the great work on your show, it continues to inspire me to keep creating in these strange times.