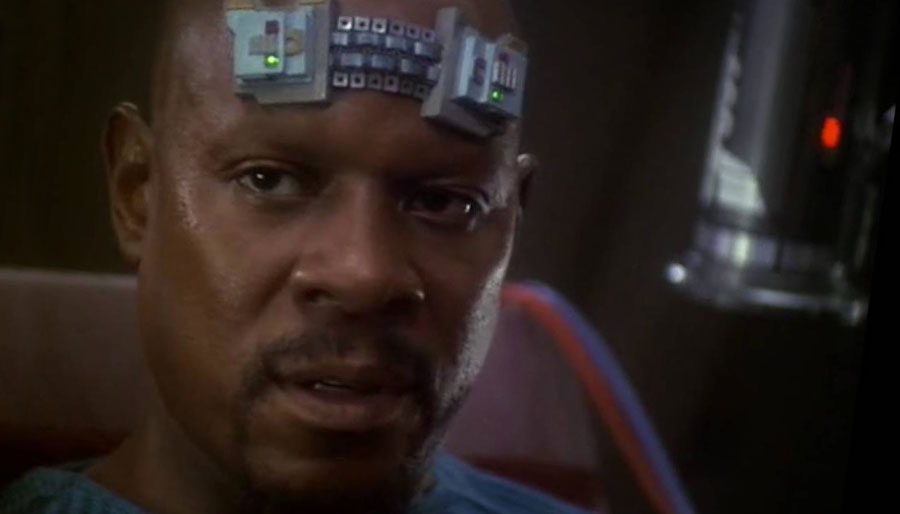 Our resident Star Trek blogger, Willow Yang, turns a critical eye to the highly-regarded episode of DS9 (Season 5, Episode 13), “For The Uniform.” Has the message sent by this episode changed since it was first shown on television over twenty years ago?

Does taking an “eye for an eye” lead to blindness?

I’m writing to discuss what I find to be a rather problematic episode of Deep Space 9, For the Uniform, also known as the episode where Sisko commits crimes against humanity by using weapons of mass destruction on a planet without authorization from Starfleet…and apparently gets away with it scot-free. 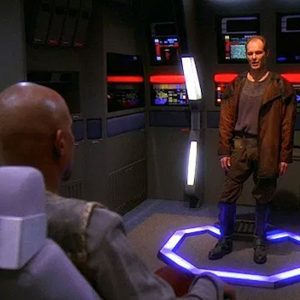 Captain Ben Sisko gets tough with the Maquis when it comes to bargaining for peace.

To give a quick recap, Sisko is attempting to capture the former security officer Eddington, who had previously, in For the Cause, revealed himself to be a member of the Maquis and defected from Starfleet. All of his attempts proved unsuccessful, however, as the conniving Eddington was able to thwart him and Captain Sanders of the Malinche at every turn (although Eddington made it a point not to kill any Starfleet officers as the Maquis are at war with the Cardassians and not the Federation). Eddington also utilizes weapons of mass destruction on a Cardassian colony, rendering it uninhabitable for its occupants. Finally having had enough, Sisko decides to fight fire with fire and utilizes a weapon of mass destruction on a Maquis planet, poisoning its atmosphere, and threatens to poison many more planets unless Eddington turned himself in. Seeing that Sisko wasn’t playing around and really meant to make good of his threats, Eddington surrendered himself. The end.

I will start out with saying that The Maquis are one of my favourite antagonists on Star Trek, precisely due to the ethical and moral questions that they raise.

On the other hand, however, that still came at the expense of disenfranchising millions of their own citizens, forcing them to choose between losing their homes or being at the mercy of a xenophobic, fascist empire. For the colonists that decided to remain following the treaty, what choices did they have when the Cardassians continuously oppressed, harassed, and terrorized them?

Was the Federation right to stand back and not aid its former citizens, even when they had strong evidence that the Cardassians were violating the terms of the treaty, and were arming their own colonies in the demilitarized zone? These are all issues that we face in our own world, and there are certainly no clear and easy answers.

As I’ve stated off the top, I believe that Sisko used weapons of mass destruction (WMDs) in For the Uniform, and I do believe that his actions amount to crimes against humanity. To back up these claims, let’s look up some definitions first.

According to Wikipedia (which is, of course, a highly trustworthy source), a WMD is defined as “a nuclear, radiological, chemical, biological, or any other weapon that can kill and bring significant harm to numerous humans or cause great damage to human-made structures (e.g., buildings), natural structures (e.g., mountains), or the biosphere.” Even if we assume the best-case scenario – that nobody was killed or seriously harmed during Sisko’s attacks – I think it’s very clear that unleashing a weapon that poisons the atmosphere of an entire planet, rendering it uninhabitable for half a century, falls under that definition. Did Sisko commit a crime against humanity?

According to Wikipedia, “Crimes against humanity are certain acts that are purposely committed as part of a widespread or systematic attack, directed against any civilians, in time of war or peace.” There were numerous non-militants and civilians on the Maquis colonies that had nothing to do with the attacks on the Cardassian planet or against the Defiant and the Malinche. Sisko was not only aware of it, but openly stated that he was purposefully targeting those civilians in order to pressure Eddington into surrendering himself. Thus, I think that he is guilty of crimes against humanity.

Were Sisko’s actions justified? I would answer with an unequivocal “No!” Now, I do have to acknowledge the fact that Eddington struck first in the episode with his poisoning of the Cardassian planet.

However, the Cardassians were the ones that instigated the entire conflict by constantly harassing and terrorizing the once peaceful colonies that were in the demilitarized zone and secretly arming their own colonists in the area, leaving the former Federation citizens with no choice other than to fight back. Eddington certainly did escalate things with his use of a WMD, but is further escalation the correct response to such an attack? Do two wrongs make a right?

During times of war, there are still laws that must be followed, there are still boundaries that should not be crossed. Sisko did not obtain authorization from Starfleet to poison the Marquis planet. Should a single person be given the power to make such a decision, especially someone who is so clearly being compromised by their own personal emotions that it’s doubtful they can analyze the situation in an objective manner?

Which brings me to the second point: it was apparent in the episode that Sisko’s concern for the Cardassians comes only secondary to his own personal vendetta against Eddington. His actions were driven more by anger, by his feelings of humiliation and betrayal, than by the belief that he was doing something for the greater good.

As was with the murder of Tuvix in Voyager, I didn’t mind Sisko’s actions in on itself. I think that For the Uniform could have been a compelling character study on how a good person can be overtaken by their obsession, their anger, their desire for vengeance, causing them to do the unconscionable.

I think that For the Uniform could have been a haunting moral dilemma on how far a person should be able to go to stop a terrorist. But unlike Tuvix, which did depict the forcible euthanasia of its titular character as something that’s morally objectionable – as evidenced by the look of anguish on Janeway’s face in the final shot – Sisko’s unauthorized use of WMDs on civilians was treated as being entirely reasonable and just. He does not face any consequences, he does not exhibit any guilt or remorse, and his crew – after getting over their initial shock when he first ordered them to poison a planet – doesn’t later question him on his actions and state of mind.

Indeed, Jadzia even compliments him, with a final line in which she states that she likes it “when the bad guy wins”. Eddington, upon being told by Sisko that he had betrayed his unform, retorted with: “And you’re betraying yours right now! The sad part is, you don’t even realise it. I feel sorry for you, Captain. This obsession with me, look what it’s cost you.”

In my opinion, the actions of Sisko and his crew – who were all complicit – are a betrayal of not just Starfleet values of the 24th century, but of the flawed human values of today.