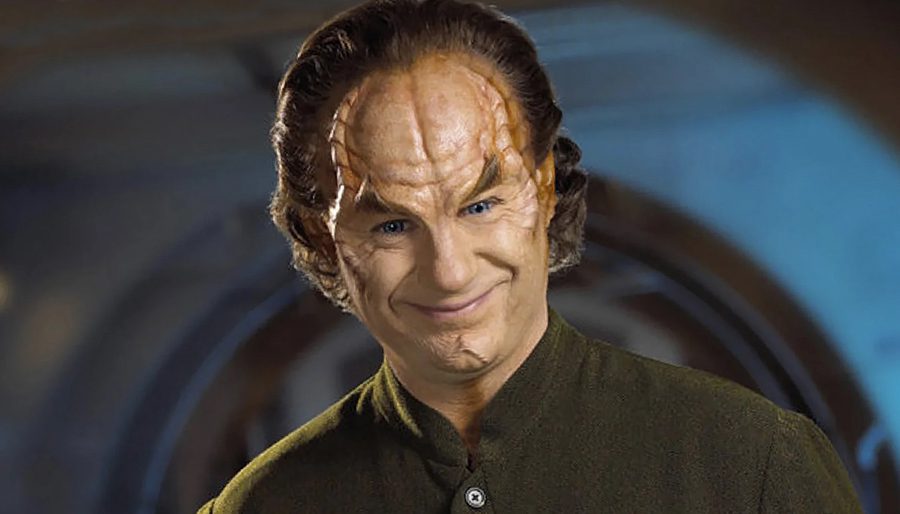 To give a recap, the story is told primarily by Phlox as he writes a letter to a human colleague on Denobulan. The Enterprise crew has encountered a pre-warp vessel carrying an alien, a Valakian, who is suffering from some mysterious illness. The Valakian reveals that there is a plague on his home planet, and that he has travelled to space in hopes of finding a more advanced civilization to help them develop a cure for the disease.

After some deliberation, Archer agrees to travel to the Valakian home planet to lend aid. They learn that the planet is actually inhabited by two groups of sentient humanoids, the aforementioned Valakians, who are more technologically advanced, and the Menks, who are much more primitive and appear to be immune to the illness. Phlox discovers that the plague that’s affecting the Valakians is actually genetic, and that the race is doomed towards extinction. Although he was able to find a cure to the disease, he argues that such interference would be unfair to the Menks, who appear destined to become the eventual dominant race on the planet, and that they should allow nature to take its course.

Archer ultimately agrees with Phlox (after giving a speech about how there will someday be a directive informing them on how to deal with difficult situations like this), and they leave the Valakians to presumably their eventual doom. The end.

A moral dilemma with some flaws in logic 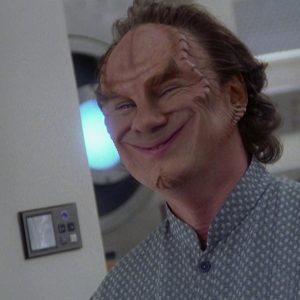 Dr. Phlox, a Denobulan, is still working on his “human” reactions.

As I’ve stated right off the top, I loved Dear Doctor. My favourite episodes of Star Trek have always been the ones that present difficult moral dilemmas, whether it’s The Next Generation’s Higher Ground or Voyager’s Tuvix or Deep Space 9’s For the Uniform, episodes that are able to present compelling arguments from both sides, that make me think long after the credits have rolled, that may stir up some controversy among fans as they debate the morality of the characters’ actions.

Dear Doctor is certainly one such example. Because the episode discussed genetics however, I’ve just got to take a moment to examine the science. Phlox claimed that the Valakians are suffering from a genetic disease where “the proteins that bind to their chromosomes are deteriorating”.

My guess is that he is referring to histones (or whatever the Valakian equivalent to histones are). To give a bit of background information to those who aren’t familiar with the terminology, the amount of DNA in humans (and most eukaryotic organisms) is absolutely enormous, and would not be able to fit inside of a cell if it isn’t properly bundled up. To package and condense DNA so that they take up less space, the DNA strands (which can be imagined as being a very long string) are wrapped around special proteins called “histones” (which are sort of like spools) to form a protein-DNA structure that’s known as a chromosome.

Now, there are some parts of Dear Doctor that did bother me a bit.

First of all, the Valakians are shown to be quite an advanced society that’s already capable of space-faring (in spite of not having yet developed warp technology). They are arguably even more advanced than we currently are, in the early 21st century. So how is it that they weren’t able to figure out for themselves that the disease they’re being afflicted with isn’t a pathogenic one, but rather genetic? How were they not able to notice that it wasn’t being transmitted between individuals? How did they not see the deformities in the chromosomes of all those that have been affected?

Secondly, the whole thing about the Valakians heading towards an evolutionary dead-end where they will all eventually become afflicted by severe genetic mutations doesn’t really sound all that plausible in my opinion. Provided that the population of Valakians is sufficiently large – which it is, considering that Phlox mentioned there are over fifty million already affected by the disease – there should be plenty of genetic variation, and plenty of individuals that do not carry the mutation.

In other words, I do not see any reason why natural selection would be favouring the affected individuals over the ones that aren’t affected such as that the entire population will eventually all carry the genetic disorder. The only scenario in which that may be feasible is if the severe symptoms of the disease only manifest later on in life, after the individual already has had the chance to reproduce, and that affected individuals tend to also have higher fecundity (more offspring) than unaffected individuals. If that was the case however, then the Valakians wouldn’t be headed towards extinction, just a population that has an overall shorter lifespan.

The science aside, I do have one additional minor criticism of the episode, which is that I found the speech that Archer gave near the end, when he decided not to aid the Valakians, to be a bit cringey. “Someday my people are going to come up with some sort of a doctrine, something that tells us what we can and can’t do out here, should and shouldn’t do. But until somebody tells me that they’ve drafted that directive…”

Maybe to a person who’s watching Star Trek for the first time and hasn’t heard of the Prime Directive, the lines won’t seem out of place. For me however, it was just a little too on the nose.

But of course, there’s the main moral debate of the story: should Phlox and Archer have intervened to save the Valakians?

I actually don’t have a position here: I think either option taken would have been quite problematic. I would, however, like to examine the reason why Archer himself ultimately decided against giving the Valakains the cure.

He specifically stated in the aforementioned speech that he “didn’t come out here to play God”. My question is, what exactly constitutes as “playing God”? Is terraforming moons and planets playing God? Is controlling the weather and preventing earthquakes playing God? Is using vaccines to wipe out diseases like polio and smallpox playing God? All of these aforementioned examples are things that Starfleet don’t take issue with doing, even though they arguably go against the course of nature.

And while the Prime Directive doesn’t yet exist during Dear Doctor, we know that if it did, it would dictate that the Enterprise does not lend aid to the Valakians and hence interfere with the development of a pre-warp society.

But what if the Valakians did actually have warp technology? Should Phlox and Archer help them then, even if it would still have come at the expense of the Menks?

Is the “Prime Directive” flawed?

And this brings me to the biggest problem that I have with the Prime Directive: I think it is, by nature, rigged against the less developed societies.

Now, I do think that there are excellent arguments against interfering with a culture’s social development; after all, we’ve seen how disastrous interference into other country’s affairs can often turn out in our own world. The problem I see is that, by allowing the more developed planets to aid and support each other while leaving out the less developed planets, this just creates a system where the more advanced and powerful societies are able to get even further ahead whereas the less advanced ones end up falling by the wayside.

Again, I believe that there are excellent arguments both for and against lending aid to the Valakians, and I personally still don’t know which side I’d take in this situation. However, I completely reject the notion that if the Valakians had just been more technologically advanced it would completely change things, that it would suddenly make it morally right for the already disadvantaged Menks to get even further screwed over.