Considered one of the greatest films of all time, are people forgetting Citizen Kane? 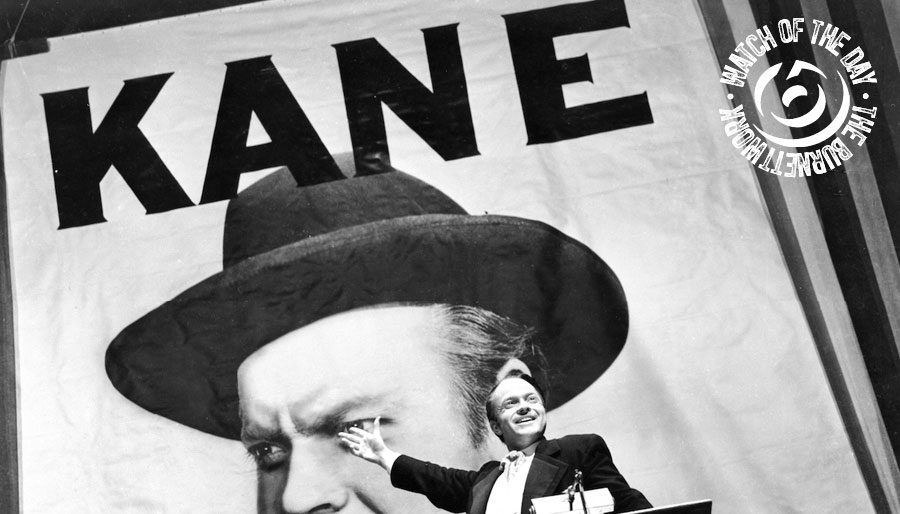 Orson Welles’ cinematic masterpiece, CITIZEN KANE, is considered to be one of the most important movies of all time – but it’s on the verge of being forgotten by today’s audiences. Why should this film be your WATCH OF THE DAY?

Step back from the hectic nature of today’s world and think about why, from it’s announced premier, this film was hailed as a landmark, cinematic achievement:

1.  The filmmaker (and star) of CITIZEN KANE, Orson Welles, was well-known as a stage and radio actor. In fact, it was his merry band (The Mercury Theatre of the Air) who drove New York City into a panic one Halloween night with their broadcast of H.G. Wells’ THE WAR OF THE WORLDS.

Because of Welles’s reputation, RKO gave him nearly complete creative freedom with KANE. He was a maverick and no one knew what to expect. And they certainly didn’t expect what he delivered.

2.  CITIZEN KANE is a masterpiece of art and technical achievement. Welles literally re-wrote many of the conventions of storytelling via motion pictures. His use of light (and, maybe more appropriately, darkness), the technical achievements and physical demands put upon himself were largely under-appreciated by those outside the industry. But they all worked together to keep CITIZEN KANE at the top of many film school “must sees” when it came to understanding how to evoke mood and motion through the lens.

If you are a fan of the “film noir” style, CITIZEN KANE defined the genre a good twenty years before it became vogue (in the 50s).

3.  Finally, and maybe most importantly to today’s 21st Century audiences, this movie was a dramatic characterization of a leading figure in American life. Charles Foster Kane road his fame and fortune earned as a media tycoon to the height of power only to fall thanks, in no small part, to his own hubris.

A group of reporters are trying to decipher the last word ever spoken by Charles Foster Kane, the millionaire newspaper tycoon: “Rosebud”. The film begins with a news reel detailing Kane’s life for the masses, and then from there, we are shown flashbacks from Kane’s life. As the reporters investigate further, the viewers see a display of a fascinating man’s rise to fame, and how he eventually fell off the top of the world.

Originally, the movie was going to be based on the life of Howard Hughes with Joseph Cotten in the lead. Eventually, Orson Welles realized nobody would believe most of the stuff Hughes had done, so he decided to make Kane a media baron instead.

Co-writer Herman J. Mankiewicz actually knew William Randolph Hearst and his mistress, Marion Davies, the two figures that Citizen Kane (1941) essentially lampoons. Both Mankiewicz and cinematographer Gregg Toland had been ejected from one of Hearst’s famous parties for excessive drinking. At one point, Welles tried to buy out the screen credit of co-writer Mankiewicz. Welles actually paid him several thousand dollars. However, the Writers Guild got wind of this and said that was not permitted.

When Welles tried to get his money back, Mankiewicz had already spent it.

During filming, Orson Welles received a warning that Hearst had arranged for a naked woman to jump into his arms when he entered his hotel room, and that there would also be a photographer to take a picture that would be used to discredit him. Welles spent the night elsewhere.

After production wrapped, Hearst forbade any advertisements for the film in any of his newspapers. He extended that prohibition to include any other RKO movies, and offered to buy the negative to Citizen Kane from the studio so he could destroy it. Fortunately, Welles had already previewed the film to influential industry figures to rave reviews, so it was granted a limited theatrical release.

Critics from non-Hearst newspapers fell over themselves praising the film.

The film itself was not reviewed in any Hearst newspaper until the mid-1970s, when the film critic for Hearst’s “Los Angeles Herald-Examiner”, Ray Loynd, finally reviewed it.

Hearst was so angered by the film that he accused Welles of being a Communist in order to keep the film from being released. On the night the movie opened in San Francisco, Welles found himself alone with Hearst in an elevator at the city’s Fairmont Hotel. Aware that his father and Hearst were friends, Welles extended an invitation to the magnate to attend the film’s premiere. Hearst turned down the offer and, as he was about to exit the elevator at his floor, Welles remarked, “Charles Foster Kane would have accepted.”

Despite all the publicity, the film was a box-office flop and was quickly consigned to the RKO vaults. At 1941’s Academy Awards the film was booed every time one of its nine nominations was announced. It was only re-released to the public in the mid-’50s.