Can it get any better than a fight between Godzilla and Kong? Well … 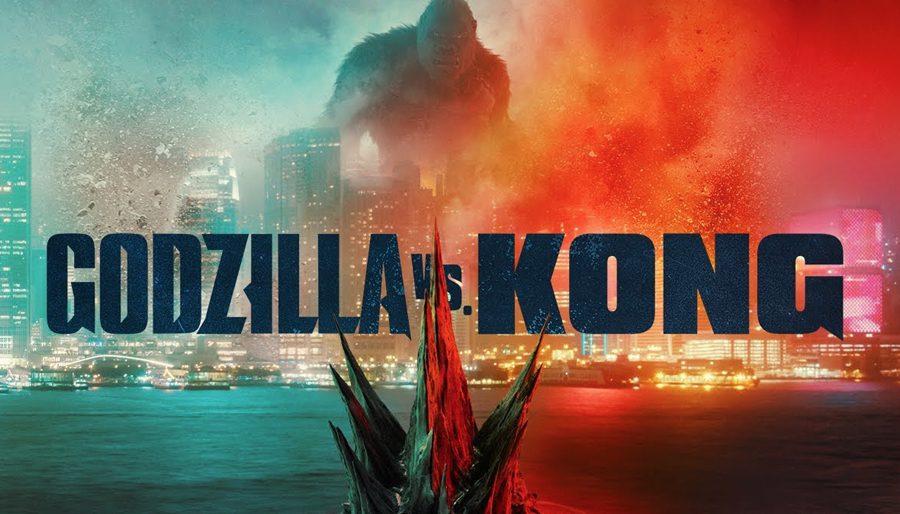 Review by Joe Dick, a self-professed “lifetime connoisseur of gourmet imagination” from Canada.

I keep wanting to call this Kong vs Godzilla for some reason. Maybe I wanted the big ape to win.

I went into this with very little knowledge about these two monsters. At least in their modern incarnations. 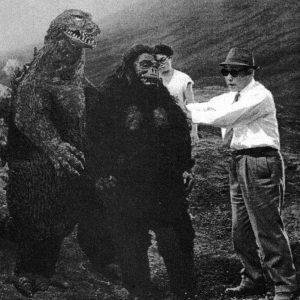 The first movie fight between King Kong and Godzilla involved two guys in rubber suits throwing each other down in the Japanese countryside in 1963.

I kind of like the much less believable, earlier Japanese stuff. Less believable f/x I mean, but bad f/x can have its charm. Nothing in these movies is believable, but we suspend that disbelief. (Godzilla vs Kong put that to the test.) These newer movies are all tarted up with CGI out the ass. But it’s like some bimbo whose beauty is all from surgery and implants. It seems kind of empty. Instead, give me the guy in the rubber suit.

A lot of people might think I’m insane for saying that. I’m reminded of one of Ebert’s criticism of the first Tobey Maguire Spider-Man movie. He thought Spider-Man seemed too much like a “video game figure” and in some ways things haven’t improved in the 19 years since.

So I didn’t see Godzilla: King of the Monsters or Kong: Skull Island until after Godzilla vs Kong, but no big deal. I figured I should be able to go into this movie and know what’s going on. They want to make as much money as possible, so make it as accessible as possible. All you need to know is that two giant monsters are going to drop gloves and throw down.

What did take me out of the story was how so much else didn’t make sense even if you’d seen those other movies. A battle of two titans? Anyone can understand that. Kong vs Godzilla. Superman vs Batman. Gilgamesh vs Enkidu. Kramer vs Kramer. Whatever. But where did those spaceships come from? Who made the Hollow Earth? 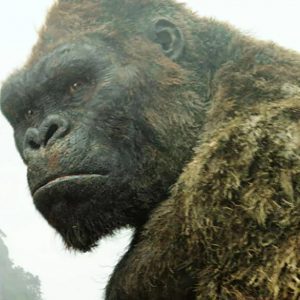 I didn’t mind the introduction of the Hollow Earth in itself. I never thought these movies should be slaves to real-world physics. They don’t take place in the real world. But give us some explanation, don’t leave us wondering. Or it will take you out of the story, and that sucks. When you get immersed in a movie or a play, it’s great.

Years ago I read Asimov’s Annotated Gulliver’s Travels. He talked about the impossibility of the giant Brobdinagians. Twelve times our size, too tall and too heavy to stand up. Kong and Godzilla couldn’t exist based on that alone. That’s okay, though. That’s not a complaint. I can suspend disbelief. Up to a point. This movie asks too much. You make rules for your fictional world and you stick to them. I think Tolkien might have said that.

Anyway, explain it in some way, even if it’s with bullshit pseudo science. It doesn’t bother me that in Star Trek the warp engines couldn’t work the way they do. Magic in The Lord of the Rings is complete nonsense. (It *is* magic, so it has to be nonsense.) But, they lay out the rules and stick to it. It works. In that world, it’s possible. But the explanation shouldn’t raise other, unanswered questions.

So okay, the physics are different in Godzilla’s and Kong’s world. I buy that. With a Hollow Earth they have to be. Or there’s something different about their physiology. Or both.

The idea of traveling through the center of the Earth is an old one. I remember reading something once about the difficulties of ever doing that. Partly due to the molten core, but also the physics of it, with the way gravity behaves that far down. The physics of this universe must be indeed be very different. No molten core? A completely hollow Earth? Or something else? Fans have speculated on a lot of this, but there’s nothing in the movie to answer it. If aliens had built the Hollow Earth they could have installed giant solar lamps. There could be that or other pseudo-scientific explanations. Even if they wouldn’t work in the real world, they would be satisfying enough for a movie. Those little space ships, though, were centuries ahead of us, with no explanation.

The Hollow Earth is the key to explaining the rest. They should have included a lot more of that stuff, i.e. conspiracy theories, e.g. the Roswell aliens. (Or should I say conspiracy hypotheses?) Alien tech could explain those ships and Mechagodzilla. Too late to say it’s a flat Earth? Whatever else. In that universe, Oswald *was* a patsy. The Holocaust…okay, don’t use that one. Not every conspiracy theory. But a lot of them. Aliens built the pyramids. And were responsible for the Caramilk Secret. Whatever. The kind of stuff you might have heard on “Coast to Coast with Art Bell.” 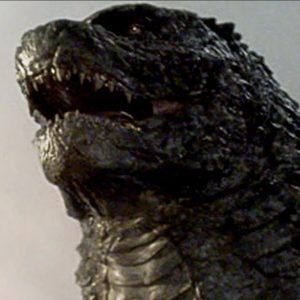 Anyway, you can’t go wrong including aliens in a Godzilla movie. Give me that as an explanation, fine, that’s in the Godzilla tradition. As *part* of the explanation. What about the light source in the Hollow Earth? Where does the air come from? There are so many questions, and “aliens” wouldn’t be enough by itself. Just like “Hey, it’s none of your business, watch the movie and stop thinking” isn’t helpful either. But that’s all we get. In Jurassic Park they gave us the bullshit explanation of DNA trapped in amber. Even though it was bullshit it was at least an explanation and you could stop thinking about it.

I’m not sure how to explain the takedown of Mechagodzilla by spilling some liquor on a computer. The lax security of that place is equalled only by their inept engineering. If you’re going to do something like that, get Jeff Goldblum. We believed in him and his laptop in Independence Day. (Okay, we didn’t. But it was Jeff Goldblum.)

Earlier Godzilla movies weren’t shy about putting in aliens and all kinds of crap. Whatever they needed to explain whatever crazy thing they wanted. It works in context. In something classy like Citizen Kane, people would be scratching their heads. In a monster movie, it works. Some people bring the class, others bring the trash. But trash can be good too.

People often complain about the boring human drama in these movies. But you need that. Bore us with all the human stuff and make us jones for the monster fights. When it happens it’s all the sweeter. Ever see Alien vs Predator? The public thought it wanted wall-to-wall monster fights. They gave us what we wanted, and it sucked giant elephant cock.

It would have made more sense if at least one of the entrances to the Hollow Earth had been on Skull Island. Otherwise, what’s Kong’s food supply? And how did he get there? The island could not have supported him even before he reached adult size. He could live in the Hollow Earth, with Skull Island as his weekend getaway. His man cave. Problem solved. Or not, because you still have the problems of food supply and a lot of other things. (Of course, he’s more than a giant gorilla because gorillas are actually pretty gentle, and are vegans. Kong’s not. Why not?)

If he lives in the Hollow Earth, it explains why he never knew about the rest of the world. When the only entrance to the Hollow Earth he knows of is on an island. In the middle of nowhere. Despite his size, he’s still got a monkey’s pea brain. If the Kong species are super-intelligent, it would make sense who made that axe and all the other stuff. I guess this Kong is the Forrest Gump of his species. I read something recently about a group of mastodons isolated on an island and the problems caused by inbreeding. Maybe the Kong species went the same route.

But we’re never told any of this. I was often taken out of the movie, wondering “Wait, what? Where did that come from? Who built that? How/why did that happen?” and other questions.

There could be other entrances to the Hollow Earth around the world. Including of course one near Japan. Who put them there? Aliens? I guess they created the Hollow Earth too? We’re left wondering. A question answered brings up a thousand more questions. It’s almost as though the writers didn’t care about the story. Did they think up the action set pieces first, needing only some thin story to link them together? They might have thought, “Eh, people will only care if it looks cool, they won’t ask why.” They know people will see this movie no matter what. But audiences might be less forgiving in the future. As cool as it is to see giant monsters fight, that alone isn’t enough without a better story to justify those fights. One of the Red Letter Media guys accurately described the story as seemingly written by a child. Agreed.

Okay, Kong now rules in the Hollow Earth. Where are the others of his species? And other Godzillas? Where’s Lady Kong? Maybe that’s why these monsters are so angry. Then again, Godzilla doesn’t seem to have any junk. Maybe it’s hidden inside, like with the Creature in “The Shape of Water.” Or Godzilla is female, and on the rag, and Mr. Godzilla is down in the Hollow Earth waiting out the storm.

Does it diminish them if Kong and Godzilla are each just one of a multitude in a species? I think it does.

These days it seems like a lot of movies exist only to set up other movies. So they might be planning explanations for down the line. Explain it here and it would be a lot more satisfying. And they can still do more, but might need a little more creativity.

That said, I don’t know if any of the earlier Kong movies ever said where he came from. Did the 1933 original ever say? It’s been a while since I’ve seen it, but I don’t think they did. It didn’t seem to matter.

Despite trashing this movie so much I still enjoyed it, but I doubt I would rewatch it. Except for the fights. It felt like eating a lot of junk food – enjoyable while it lasted, but then you hate yourself after.