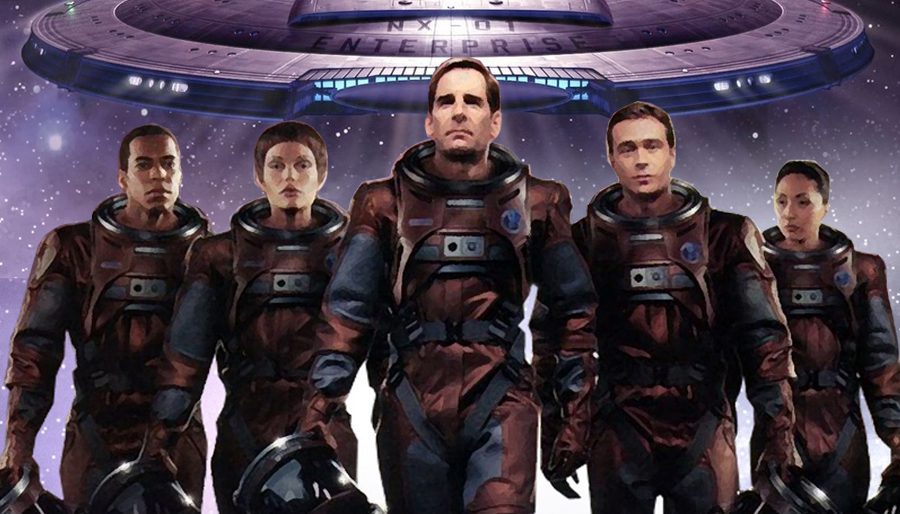 As I’ve mentioned in a previous letter, I have commenced my first viewing of Star Trek: Enterprise. Here are my brief thoughts for the first four episodes following the pilot. 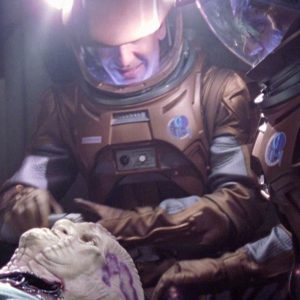 The Enterprise comes across an adrift Axanar ship whose crew has been murdered, and Hoshi has to convince another Axanar ship arriving on the scene that the Enterprise wasn’t responsible for the crime.

While I’m a bit disappointed that the series didn’t continue on the “temporal cold war” story-line after the open-ended conclusion of Broken Bow, I do think that Fight or Flight is a decent follow-up to the pilot. The scene of the Enterprise crew finding the strung-up bodies of the murdered Axanar was effectively creepy; it’s actually somewhat reminiscent of the Firefly episode Bushwacked, where the crew comes across a ship that had been attacked by Reavers.

I also liked the debate that Archer and T’Pol had over whether they should lend aid: it is a good reminder to the audience that the Prime Directive hasn’t yet been established and the crew are given much more freedom to chose their best course of action in the absence of an established set of rules and protocols.

I was initially annoyed by Hoshi when she starting having a breakdown after being asked to communicate with the Axanar captain, but after dwelling on it longer, I do think it’s an understandable reaction given that she had been traumatized earlier and was under a tremendous amount of pressure. I hope to see her character and the other crewmembers grow and develop over the course of the series as Deep Space 9 has successfully done with its cast of characters.

The crew explore an alien planet where they begin seeing mysterious humanoid creatures due to hallucinogenic plant spores, and the humans grow suspicious of T’Pol.

Star Trek has done a number of horror episodes, and while this one didn’t really stand out to me as one of the greats, I still thought it was decent. The episode does remind me a bit of The Next Generation’s Identity Crisis, with the crew investigating a mysterious planet where strange things were happening. The incident with one of the crew members in the transporter, getting beamed up with plants merged inside of his body, was effectively cringe-inducing and makes me really hesitant about wanting to get inside a transporter if such technology ever gets invented.

I also loved that the episode delved more into the tension and mistrust between the human characters and the Vulcans in the pre-Federation era, something that I hope will continue on being explored throughout the series.

A female Xyrillian “accidentally” impregnates Trip after he goes over to their ship to help them fix their engine.

Okay, as someone who’s read a fair amount about m-preg in slash fiction, I’ll be the first to acknowledge that this was not a very good episode. I’m just assuming that the writers meant for this to be comedic, and if that is indeed the case, then the comedy is rather juvenile, as in seeing a man grow extra nipples on his arm type of humour.

However, Unexpected does differ from episodes like The Original Series’ Turnabout Intruder and Deep Space 9’s Profit and Lace in that it is played pretty straight. I did actually find the scene of Trip getting paranoid over his colleagues gossiping about his “condition” quite funny, and I appreciated that the acting didn’t get too over-the-top. The episode does also have some importance to Star Trek canon with the introduction of holodeck technology that’s used by the Xyrillians.

As an aside, I do find Xyrillian reproduction to be rather bizarre. The whole reason why different sexes exist is to allow genetic recombination so that there will be greater diversity in the population. If female Xyrillians contribute 100% of their DNA to an offspring, why are there even two separate sexes? That completely defeats the purpose of having males in the population. 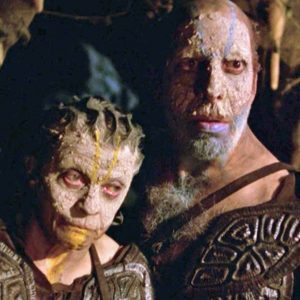 The Enterprise visits an old human colony that was established on a planet 70 years ago to find that it has been irradiated, with the descendants of the colonists – who now call themselves the Novans – blaming the humans for what happened.

This is my least favourite episode out of the four. Now, I did like the lead-up to the crew traveling to the colony, the anticipation in finding out what had happened to the colonists. And then, it all just goes downhill. The story doesn’t make much sense.

Firstly, how could the human colonists, in the span of 70 years (which is just 2-3 generations) have evolved into scaly blue-skinned creatures? How did Nadet, who was just a regular-looking girl 70 years ago, grow up into an armadillo?

Finally, the colonists were shown to be very primitive, which does make sense considering that they were children who’s had to fend for themselves. So how were they able to manufacture sophisticated firearms? Unless the guns were from 70 years ago, and they didn’t run out of ammunition after all those years?

Logic issues aside, the story itself was just boring and uninspired: by depicting the Novans as childish cavemen that are objectively wrong about the facts, the writers rob the episode of any substantive debate or dialogue. And unlike the preceding episode Unexpected, Terra Nova didn’t even have anything memorable or amusing to be at least entertaining.

These are just my quick thoughts on the first several episodes of Enterprise. I’ve almost finished the first season, and it’s been a bit of a hit and miss for me. There are some very good episodes like The Andorian Incident and Dear Doctor, some rather painful ones like Rogue Planet and the aforementioned Terra Nova, and a number of middling ones. I do like the main cast of characters however, I like the aesthetics and set designs, and I love the overall premise. I look forward to watching more of the series.