A little love for the Hobbit movies …

Imagination Connoisseur, Vesna Lukic, has a confession to make – she prefers Peter Jackson’s HOBBIT trilogy over the LORD OF THE RINGS series of films. But before the PGS devolves into its own version of the War of Five Armies, be sure to read Vesna’s critique of the Hobbit films.

Hello Robert and all the members of our little community.

I have a confession to make.

I don’t know if your opinion about me would change after this, but I’ve heard that it’s a good to your soul to admit ones sins, so here it is. I like The Hobbit movies. And I like them more than the book itself. There.

Now, that that burden is off my chest I’m going to explain why. I know that they have some issues, and no, that “love triangle” is not one of them, but it’s mostly based on a visual aspect , color palette and that damn 3D… and that was the only way I could watch all 3 movies in the theater, because , unlike many others, those never had an option of 2D.

I agree they are not even close to LOTR movies quality-wise, I think that everybody can agree with that, even those who really love The Hobbit movies more than LOTR, and yes, there are people like that, just like there are people who like prequels more than original Star Wars, even the worst of them all, The Attack of the Clones.

Many of the problems that Hobbit movies had is based on production, primarily MGM, because they green lighted the production even before the adaptation right of the book was solved so the production got stopped for a long time, which lead to losing Del Toro and one of the main actors.

But all this is very well known. 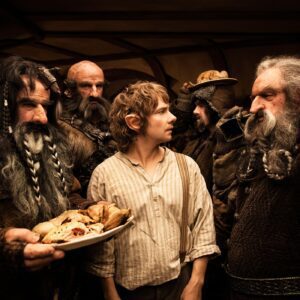 Bilbo and the adventuring party of Dwarves from THE HOBBIT.

Personally, I don’t know if I would like his vision of Thranduil, although I love most of his movies but I think his Middle Earth would be too weird even for me, and I like weird stuff. Talking about weird stuff, having sex with a fish is a little bit different than Woman Elf and Man Dwarf relationship… just saying.

And I think Dwarf Men are more attractive than Dwarf Women, because of the beard.. but I guess, that’s up to a personal taste. (But I digress.)

Back to the difference between book and the movies. Most people said that’s the main reason why they didn’t like the movies is because it’s more Thorin’s story than Bilbo’s. And I agree – but it’s like that in the book also. It’s because of Dwarves quest, that Bilbo left his home.

And speaking of leaving the home, in the book even that wasn’t his decision .

He was made to do so by Gandalf, literary pushed out of the door. He was also useless in the battle with Trolls. Gandalf was the one who procrastinated them until dawn. All the things he actually did in the book , he also did in the movies, so the critique that he was the secondary character in the movies unlike in the book is not valid.

The thing I really didn’t like in the book are Dwarves. They all looked the same … and I mean totally the same. Same beard, same build, same character. The only difference was the color of their hats and the instruments they played, so, if by any chance, in the battle they lose the hat, or God forbid, the instrument (because they are very valuable during the fight), you wouldn’t know who is who.

Only Bombur looked different, and the only difference is being fat and slow.

In the book, none of them was a warrior. They were musicians. Maybe that’s why I never could remember their names, just like I couldn’t remember the names of 7 Dwarves (and they, at least, had different characters). No wonder Snow White could live with all 7 of them. That was actually like living with only one of them, just when you’re drunk.

I find it interesting that the part that most find silly, and even made a meme of it, the Eagles part, was exactly like in the book, when all of them were on that last tree (except they were attacked by Wargs and Goblins, not Orcs, although I must admit, I liked the look of Wargs more in LOTR than in The Hobbit).

I’ve never heard anybody thinking that was the silly part in the book, or maybe just because it was a kid’s book, which I don’t agree, but I will get back to that later, so silliness is allowed.

And now, here comes the best part in the movie: Thranduil.

In the book he looked more like a frog, and I have a feeling Del Toro would make him also like that, knowing his passion to amphibious creatures. I remember in the theater, after the movie, most women said: forget Legolas, give me his father – which I could agree with although I wouldn’t mind Legolas, too. Hey, if Snow White can be with 7, I could be with 2.

Talking about Legolas, it’s natural that he’d be in the movie, because at that time he lived with his father. Now, some of his, hmm, abilities were over the top, but, the way he acted, like an arrogant brat, unlike he was in LOTR is also natural. That’s why his journey to become humble and a friend with a Dwarf is even more important.

And , as I’ve said before, I don’t mind his relationship with Tauriel, which is totally fictional character made for a movie, because, there was never romantic relationship between 2 of them. Yes, he liked her, but she liked somebody else. It’s a classic story that everybody can relate to. Most popular and beautiful women often chose some, let’s just say, less handsome guys, and Kili was rather handsome, for a Dwarf.

I wonder how people would react to that foursome 🙂

All other things having been said, like Smaug, were perfect. I even liked more that Bilbo was going straight for the Arkenstone, and not take some golden cups first. That would make him just a greedy little bastard.

The ending of the second movie was perfect.While in the book, Smaug left the mountain many times, killing cattle and villagers, in the movie he did it for the first time in 60 years, so one whole generation thought he was only a myth, and when he flew away in the full glory, and then the music cut down, the sound cut down and after Bilbo’s line “What have we done”, which Martin Freeman said magnificently, the screen turned black – and it still gives me chills.

I must say, I understand why people said that it shouldn’t happened that way because by the time we watched the third movie, the whole year has been passed so one doesn’t have the same attachment for the people in Lake Town. But watching it now, back by back, it looks much better.

I won’t talk much about the third movie, because most things that people said I agree, meaning, this was the first time we actually see Azog in the movie fighting Thorin after 2 years, but, again watching back by back now, Thorin’s death has even bigger impact than the time I saw it in the theater. And again, that was handled much better than in the book.

There they were, all surrounded by other Dwarves and Elves and even people in the tent. Here, the 2 of them were alone, allowing those actors to give the best performances they’ve could.

Also, death of Kili and Fili was done much better. In the book it was just a mention. Oh, and if it was made by Bilbo’s point of view, which was also the criticism I’ve heard from the book purists, we won’t have the third movie at all, because he was hit by the rock almost immediately as soon as the battle started, so him going to warn Thorin and the company was completely made by Jackson.

I just regret that the scene of Thorin funeral was cut off the theatrical release, because it was beautiful. The only thing I didn’t like was overuse of CGI, and not in the good way. But I’m sure if all the production went on smoothly, like they’ve expected to, we would have much much better movies.

We could actually see a glimpse of that in the scene when Gandalf got captured by Bolg. That was the real Bolg we were meant to have and it was perfect. We should thank MGM for why we didn’t.

As a conclusion, I’ve said I don’t agree that The Hobbit is a kid’s book. It has death of one of the main characters, along with many others. It has war between 5 armies, and I don’t think it’s a kid’s thing.

Now, in the book , those deaths were not so graphic, and the horror of war is pink colored, but it’s still a horror. And not to mention burning people alive by a dragon fire. Now, that’s a kid’s thing, for sure!

In the end, that’s only my opinion, maybe because I’ve read Hobbit after LOTR, as a teenager, that it’s the Tolkien’s weakest work. Even he went back and re-wrote some things after he finished The LOTR book.