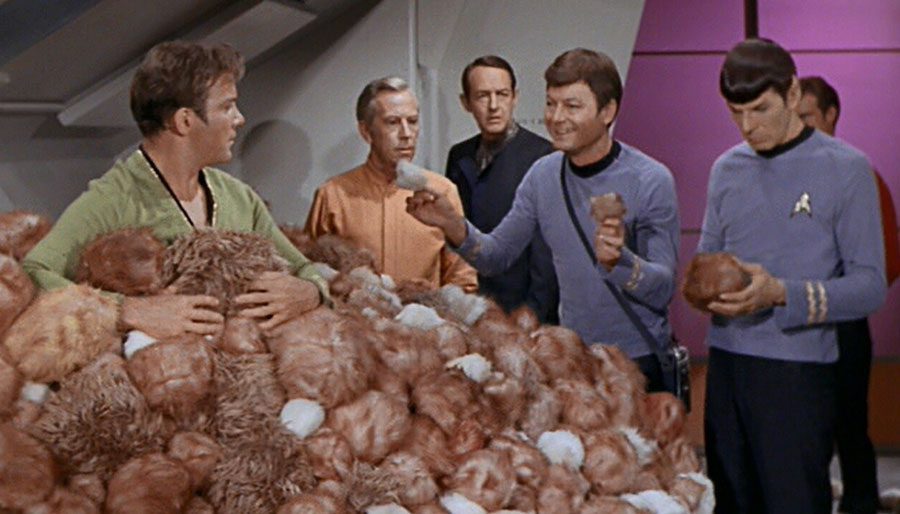 Quite possibly the most popular episode of Star Trek: The Original Series, the David Gerrold-penned “The Trouble With Tribbles” presented a whole new kind of adversary for the Enterprise crew.

Although not the only time Tribbles have appeared in the Star Trek universe, this is the original appearance and, quite honestly, the most delightful. Not only is the episode a delight, but the “behind-the-scenes” stories are every bit as humorous.

The scene in which Kirk is buried in an avalanche of tribbles took eight takes to get right. The tribbles were thrown into the hatch by members of the production crew. The crew members were not sure when to stop because they were unable to see the scene. This is why additional tribbles keep falling on Kirk one by one. William Shatner can be seen looking perplexed as to why more tribbles keep falling on him.

To protect a space station with a vital grain shipment, Kirk must deal with Federation bureaucrats, a Klingon battle cruiser and a peddler who sells furry, purring, hungry little creatures as pets.

What’s your favorite thing about this clasic, Star Trek episode? Let us know by leaving your 3-word review in the comments section, below. We know it will be “no tribble at all”  …